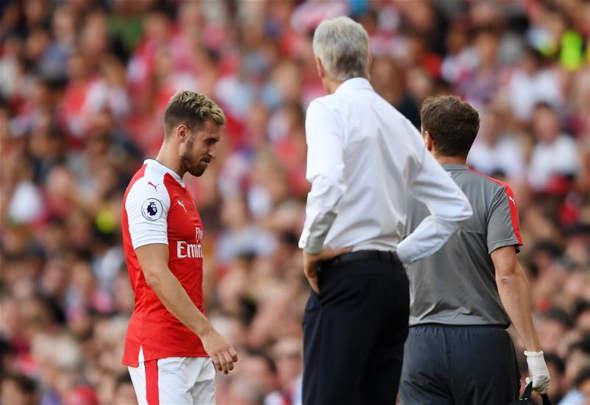 Wales international Aaron Ramsey has been named as Arsenal’s biggest disappointment of the year, having failed to live up to his previous successes.

However, despite an impressive Euro 2016 showing with Wales during the summer, 2016 has been a much less fruitful affair for the midfielder.

In fairness, some of the injury concerns have come back to haunt him, and Ramsey has been sidelined for the last couple of games with injury. However, he is set to return after Christmas, and must fight hard to return to his previous heights.

So far this season, Ramsey has failed to score in any of his 10 appearances in all competitions, and contributed just two assists. However, the inconsistencies and injuries that have affected Ramsey’s development means he is now no longer the first-name on Arsene Wenger’s team sheet, and no longer has undroppable status in north London.

It is by no means the end of the line for the 25-year-old, however. He still has the majority of his career left ahead of him. But he needs to convince the Arsenal faithful he can get back to his best again, and then stay at that level consistently for more than just a game or two.

He is a formidable talent, and if playing in the right position, can be the game-changer Arsenal need to win the title, or challenge in Europe. Sadly, that’s not been the case so far in 2016.

Maybe the bar has been set too high. Although Arsenal are a massive club, and Ramsey himself has proven in the past that he can perform at the very top level, so really there is no reason why he can’t play like that more regular basis.

The absence of midfield duo Santi Cazorla (injury) and Mohamed Elneny (African Cup of Nations) could give Ramsey a perfect opportunity to nail down a starting place for the next couple of weeks, and if he can build some momentum and put together a string of excellent performances, there’s no reason why 2017 can’t be a completely different year for Ramsey.

In other Arsenal news, the Gunners have identified this European sensation as a potential replacement for Ozil or Sanchez.