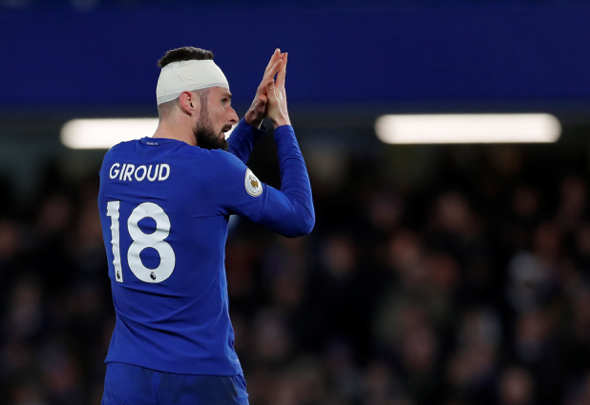 Arsenal fans got to see Olivier Giroud start for Chelsea against West Brom in the Premier League on Monday.
The French striker couldn’t get his name on the score sheet but did make a goal for Eden Hazard, who put Chelsea in the lead in the 25th minute.
Victor Moses got the second and Hazard added another in the 3-0 win, before Giroud was taken off on the hour mark and replaced by Alvaro Morata.
Arsenal fans were curious bystanders during the game tonight, with most of them fairly critical of their former striker.
One said that the game speeds up when you take Giroud off and that all he does is knock-ons and lay-offs.
Another remarked that he “refused to shake hands with Cesc (Farbegas)” when he was substituted off, although that might be more wishful thinking than actual reality.
It wasn’t a bad performance from Giroud but one fan said that he looked “disgustingly wrong” in a Chelsea shirt.
Here are the best reactions from confused Arsenal fans to the striker’s performance for Chelsea:

That's the problem with giroud. U take him off and everything speeds up. All he does are knock ons and lay offs and the problem with that is he isn't even perfect at that. His turnover rate is too Damn high. Breaks up too many plays.

Olivier Giroud lost his first two Chelsea games and then got a head injury in the third. Come home Oli ffs save yourself. SAVE YOURSELF.

Never seen a bang average striker like Giroud get so much praise, amazing what propaganda can do, worst first choice striker for Arsenal under arsene Wenger. Chelsea have been 10times better since Giroud got subbed off.

Hate Chelsea but like Giroud so much want him to do well but want Chelsea to lose.

We are already missing you Giroud 😭.. I am missing Na Na Na chant.. ☹️☹️

– Giroud is too slow as a frontman. Great header of the ball, but his passing leaves a lot to be desired. Glad we sold him.

Just realised I don't have a reason to watch the game anymore, since Giroud's gone off. Night lads

#giroud in blue looks ridiculous, #giroud wearing a head-band looks even more ridiculous. But at least he had 60 min. on the park #CHEWBA

In other Arsenal news, this Arsenal legend sends a hilarious Tweet in the aftermath of defeat v Tottenham
Don’t miss out on breaking and exclusive Tottenham news by clicking here for our brilliant 24/7 updates on Facebook, Instagram and YouTube.