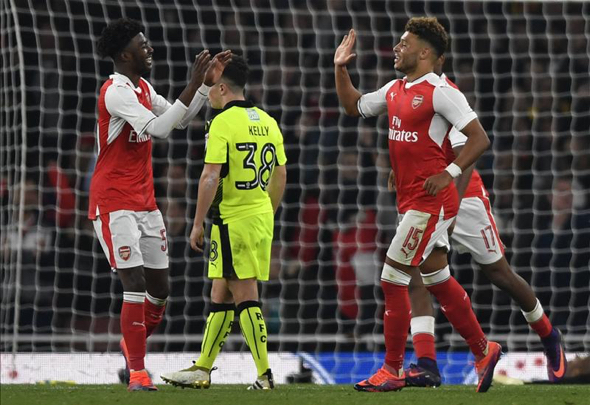 Alex Oxlade-Chamberlain makes a rare Premier League start against Sunderland, after Theo Walcott was ruled out after a late fitness test, and Gunners fans are happy with their star man’s replacement.

Oxlade-Chamberlain scored twice on Tuesday in the EFL Cup tie against Reading and Arsenal will be hoping he takes his form to the Stadium of Light.

Arsenal are expected to take advantage of their early kick-off to put space between them and leaders Manchester City. A win would take them three points clear at the top.

Oxlade-Chamberlain has made three Premier League starts this season and will be looking to push for a regular berth with an impressive performance on Saturday.

Arsenal fans have said that it’s a massive chance that the player needs to take. Here are a selection of their tweets:

Need a strong EPL performance from Ox. This is his shot.

Looking forward to the Arsenal game. Hope the Ox can build on his league cup form from earlier in the week and prove the doubters wrong.

Gibbs and Ox up your game,thats a million dollar chance huh #ArsSun #COYG

Happy with the squad.. excited to see the Ox start after recent good form. After last week the boys should be looking at a big win #Arsenal

Elsewhere, Aaron Ramsey makes the bench as Arsene Wenger has other injury issues to deal with. Theo Walcott and Nacho Monreal both failed late fitness tests, although they should be back in time for the eagerly-awaited London derby with Spurs next Sunday.

In other Arsenal team news, club legend Alan Smith highlights the one worrying problem for the Gunners this season in their title challenge.