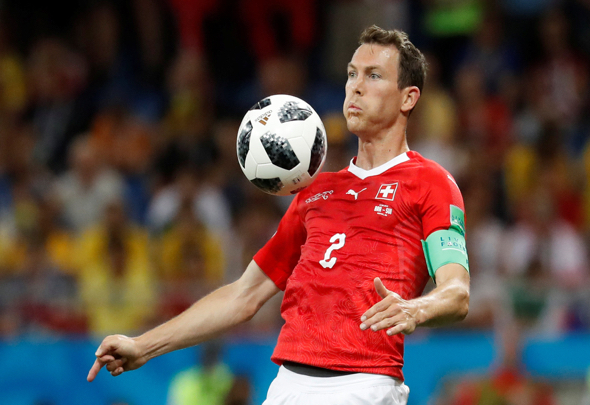 Veteran defender Stephan Lichtsteiner helped keep Brazil at bay in Switzerland’s opening game in the World Cup in Russia, and Arsenal fans have flocked onto Twitter to react.

The score ended up 1-1 after a stunning first-half strike from Philippe Coutinho was cancelled out by Steven Zuber’s header from a corner in the 50th minute.

Right-back Lichtsteiner is joining Arsenal on a free transfer on July 1 from Juventus and for a lot of Gunners fans this was their first chance to see what they were getting.

And most Arsenal fans were very happy, with one fan saying that when he emptied his pockets he’d find Neymar in there.

Another said that he would be pushing Hector Bellerin hard for a starting place in Unai Emery’s team.

One thing is certain, if he doesn’t make the starting XI, he’ll provide brilliant back-up and his experience will be invaluable – last night’s game was his 101st cap for his country.

Here are the best reactions from Arsenal fans to their new defender:

Can not understand why everyone thinks #Lichtsteiner will automatically [email protected] No chance! He is going to push #Bellerin hard #worldcup2018 #afc #arsenal

Lichtsteiner already shown he's a better defender than Mustafi or Bellerin. Amazing skills like staying between your man and the goal. Not diving in. Using the touchline as a teammate. Incredible. #SUI #WorldCup #Arsenal #AFC

Lichtsteiner sums up exactly what we’ve been missing for years. He has that grit when the going gets tough, leads by example, will make professional fouls when necessary & makes the game stop-start when required. Thought he was impressive tonight. Looks like a solid acquisition.

Lichtsteiner when he empties his pocket tonight:

In other Arsenal news, Arsenal enforcer at heart of Wenger era must be binned by Emery ASAP.