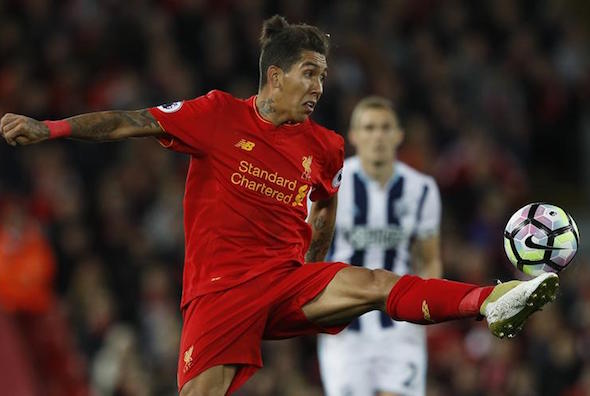 Roberto Firmino has an anti-Arsenal clause written into his Liverpool contract – and Gunners fans reacted on Twitter by dismissing the ability of the Brazilian.

According to the latest documents released by the Football Leaks group, the Liverpool attacker has an £82.6million release clause in the contract that he signed when he joined the club from Hoffenheim in the summer of 2015.

Intriguingly, the clause can be triggered by any club apart from Arsenal, who infamously riled Liverpool when they tabled a £40million-plus-£1 bid for Luis Suarez in 2013.

The clause in Firmino’s contract, published in the Belgian newspaper Le Soir, appears to have been written with Arsenal’s unsuccessful pursuit of Suarez in mind.

#footballeaks in @Lesoir:
✅ Firmino has a €98m clause that can’t be triggered by #AFC
✅ Atlético get 250k every time Agüero scores 15 goals. pic.twitter.com/nUbKOICUt9

Arsenal fans were surprised at the size of the release fee, and were also dismissive of Firmino being worthy of such money as they compared him unfavourably to Suarez.

If this Firmino thing is true. I don’t ever want to hear Liverpool fans talking about being a bigger club than Arsenal. This is a new low ?

@Arsenal4ever95 saying that, I wouldn’t pay €30M for Firmino and doubt anyone else would do it’s irrelevant anyway haha #LFC #AFC

Alexis Sanchez is just a poor man’s Roberto Firmino, anyone with eyes can see that. #MUFCvAFC #AFC

Firmino has a clause in his contract, which blocks him from any offers specifically from Arsenal. People still doubt the Suarez clause!

Firmino initially struggled to settle at Anfield following his £29million switch from the Bundesliga but he has emerged as a key member of the Liverpool team over the last 12 months.

The Brazilian has been given the nod to spearhead the front line this season and has been one third of an electrifying front three with Philippe Coutinho and Sadio Mane.

The disclosure of Firmino’s contract is one of the latest revelations to be made by the Football Leaks group, which has published confidential information from within the game over the last year.

In other Arsenal news, fans reacted on Twitter to Calum Chambers’ display at centre-back for Middlesbrough on Monday night.