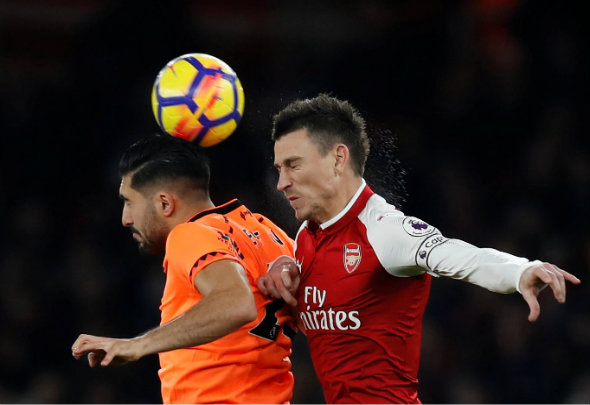 Arsenal and Liverpool went toe-to-toe in a thrilling 3-3 draw on Friday night in the Premier League, and Arsenal fans have taken to Twitter to slam the performance of centre-back and captain Laurent Koscielny.

The Gunners had to settle for a point after taking a remarkable 3-2 lead, and remain in fifth place in the table, one point behind opponents Liverpool.

Liverpool looked to be cruising to an easy away win after goals from Philippe Coutinho and Mohamed Salah put them 2-0 up after 52 minutes.

Arsenal came firing back however as Alexis Sanchez headed in from close range to spark a remarkable five-minute period that saw the Gunners take the lead.

Granit Xhaka’s hopeful shot from distance was too strong for Liverpool goalkeeper Simon Mignolet, before Mesut Ozil then scored Arsenal’s third, clipping the ball over the onrushing Mignolet to set up a frenetic finish.

Roberto Firmino however came to Liverpool’s rescue, with his powerful shot making its way past Petr Cech, who could only take the pace off his attempt before it bounced over the line.

Arsenal fans took to Twitter after the match to destroy centre-back Koscielny, who looked off-colour as the Gunners let their lead slip.

Here is a selection of the best tweets:

get koscielny out of my club. thanks.

Koscielny has been an incredible player for us for many years and I love him to bits but he's shown this season that he's not up to it anymore and he should probably be phased out throughout next season. The only question is who will replace him.

Koscielny has been extremely poor in recent months, hopefully this doesn't go on for much longer.

Can’t believe what’s gone wrong with Koscielny! Averages 2 errors per game these days. Could the armband be too heavy for him???

I think it might be time to start thinking about life after Laurent Koscielny. He’s brilliant, he’s been superb, but he’s not getting any younger.

Koscielny with a genuine 2/10 performance today, absolutely joke display backed up by weak ass goalkeeping by Cech. Less said about Xhaka the better.

Koscielny has become a clown at defending. His drastic decline is frightening

Koscielny has been a mainstay for Arsenal over the last several seasons, and the French international has in the past been regarded as one of the Premier League’s most accomplished defenders.

But the 32-year-old has been well off his best this season, and it seems as though Arsenal fans are latching on to that fact.

The enforcer looked out of position several times against the Reds, and totally lost Roberto Firmino for Liverpool’s third goal.

In other Arsenal news, the Gunners are reportedly showing concrete interest in this Barcelona winger, and are preparing to meet his release clause in January.