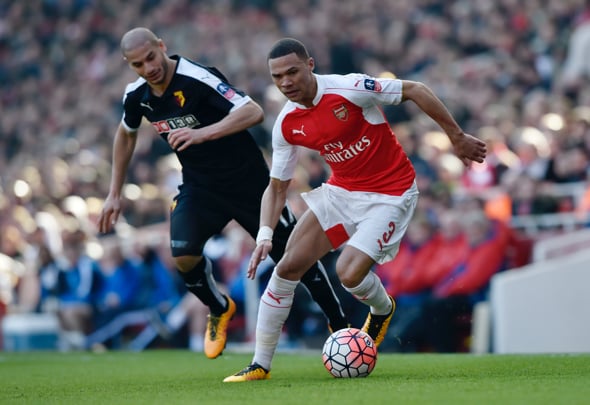 Arsenal left-back Kieran Gibbs is considering his future at Arsenal, according to a report.

The Sun have reported that Gibbs wants first-team action after falling behind Nacho Monreal as the club’s first-choice left-back.

He currently has just under two years remaining at the Emirates and it was said that he was willing to run down his contract rather than push for a move.

Now The Sun have reported that he may look for a move depending on the first-team action he gets as the squad looks to embrace Champions League football in addition to the rigours of the Premier League.

The 26-year-old defender has been with the Gunners for 12 years and signed as his professional contract in 2007.

Since then he’s made 208 appearances for the north London club, scoring six goals and laying on 20 assists.

However, his career has stalled over the past couple of years. He only made 15 appearances in the Premier League last season, down from 22 in the 14/15 campaign and 28 in the 13/14 campaign.

He is currently behind Nacho Monreal in the pecking order at the Emirates and has lost his place in the England squad after earning ten caps since making his debut under Fabio Capello in 2010.

In other Arsenal team news, this former Chelsea legend had this to say about Jack Wilshere’s surprise summer move to Bournemouth.