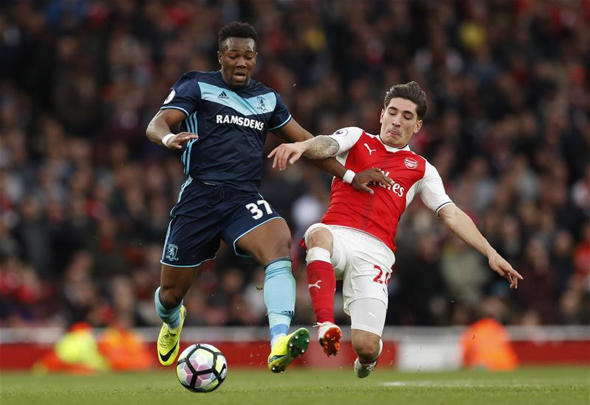 The Spain international has finalised the terms of a six-and-a-half-year deal following months of talks with the London giants.

A well-placed source has told Football Insider that Bellerin has reached an agreement that will pay him a basic salary of around £120,000-a-week plus top-up bonuses based on performances.

The total package will be worth £40.6million over the entirety of the contract and catapult the 21-year-old into the top bracket of earners at Emirates Stadium.

Bellerin does not have the experience of the club’s two standout players but has emerged as a key man since breaking into the team two seasons ago.

The Spaniard, who was plucked from the Barcelona academy at the age of 16, has been a first choice since taking advantage of an injury to Mathieu Debuchy.

Bellerin has made 87 appearances for Arsenal in all competitions and has won rave reviews for his play at right-back, most notably being named in the PFA Premier League team for last season.

His speed and recovery pace has made him a vital component of the Gunners’ attacking play as well as helping solidify the back line.

The youngster, who has won three full Spain caps, is currently sidelined with ankle ligament damage and missed his first league game of the season last Saturday, when his side drew 1-1 at Manchester United.

In other Arsenal news, a Gunners first teamer has revealed how he was signed by the club after a late Arsene Wenger U-turn.