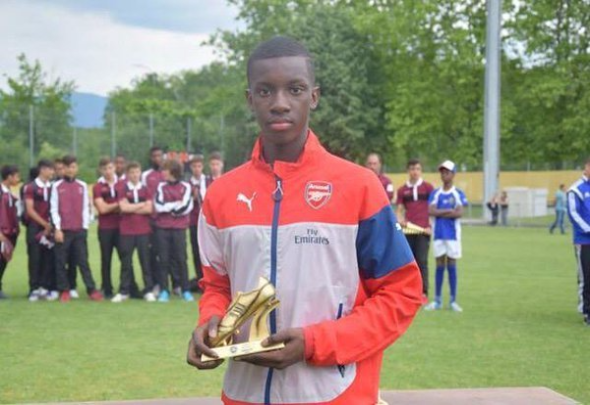 Arsenal youngster Eddie Nketiah has signed his first professional contract at the club, according to a report.

ESPN claims that the highly-regarded youngster has signed a three-year professional deal, keeping him at the Emirates until 2019.

It is also claimed that a number of clubs were monitoring the 17-year-old, but the Gunners have now made their intentions clear, offering the striker a contract.

Nketiah moved to the Gunners in 2015 after he was released by London rivals Chelsea, and he finished top scorer in the country at Under-18 level last season.

The striker, who has been compared to Arsenal legend Ian Wright, is part of a young Arsenal side which has won the Premier Academy League seven times.

The Gunners academy is currently managed by Dutch coach Andries Jonker, who has worked at Bayern Munich, Barcelona and the Netherlands national team in the past.

Arsenal are famed for bringing through a host of youngsters from their academy, including Ashley Cole, Andy Cole, Cesc Fabregas and Jack Wilshire with the club hoping that Nketiah will go on to be remembered alongside these names.

In other Arsenal team news, Laurent Koscielny has been named the Gunners player of the month for August.