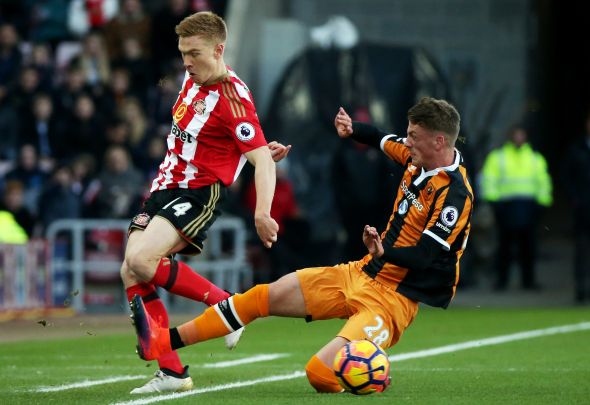 Arsenal are weighing up a move for Hull’s teenage wonderkid Josh Tymon days after he made his Premier League debut, according to a report.

The 17-year-old started at left-back for Mike Phelan’s Tigers on Saturday, as they were convincingly beaten 3-0 by fellow relegation candidates Sunderland.

ESPN FC claim the Gunners are long-term admirers of Tymon after he impressed against Arsenal last season in the FA Cup while Liverpool and Everton are also thought to be keen.

The report states that “Arsenal are hoping to steal a march on their rivals in the chase for Tymon by setting up a deal for the full-back”.

Still on a scholarship deal with Hull, Tymon is earning a relatively modest amount by the standards of the Premier League and could be lured away from the KCOM Stadium.

Tymon has featured three times in a Hull side that are struggling at the foot of the Premier League, with his other two appearances coming in the EFL Cup.

Arsenal already have Kieran Gibbs and Nacho Monreal at left-back, but a move for Tymon could be beneficial in the future as the Spaniard, who is the first choice at the club, is 31 next February.

The signing of Tymon for Arsenal would be a superb piece of business by Wenger, as the Hull star continues to show quality way beyond his years. The North London giants have struggled to find a permanent replacement at left-back since Ashley Cole left for Chelsea in 2006, with the likes of Gibbs, Andre Santos and Armand Traore all failing to make the full-back position their own. With Tymon, Arsenal manager Wenger may believe he can finally end his search for Cole’s permanent successor on the left side of defence by signing him early and nurturing him through the academy at the Emirates.

In other Arsenal transfer news, Mohamed Elneny has made a big claim about the transfer decision of his former Basel teammate.