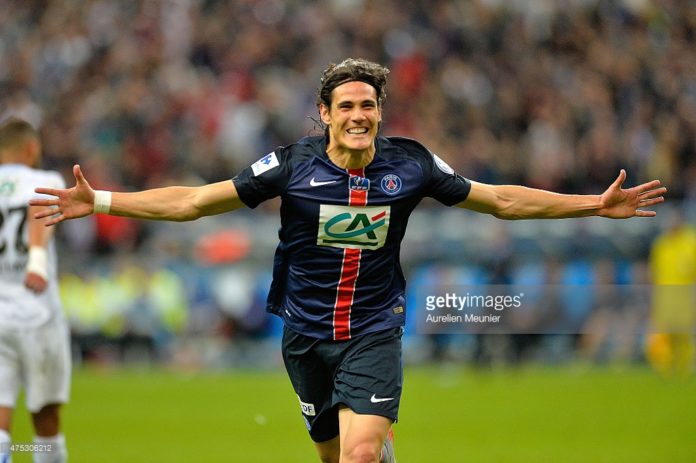 EXCLUSIVE | By Editor
Arsene Wenger will spend transfer deadline day in Paris to negotiate deals for Paris Saint-Germain duo Edinson Cavani and Adrien Rabiot, Football Insider sources understand.
The Gunners manager flew to the French capital on Monday in a last-ditch bid to strengthen his team before the Premier League cut-off at 6pm on Tuesday.
Sources have said Wenger is in Paris on ‘club business’ and that he is there to hold talks with PSG about striker Cavani and midfielder Adrien Rabiot. Further discussions are scheduled to take place today.

Football Insider revealed last week that Arsenal had targeted a £50million double swoop for Cavani and Rabiot in the final days of the window.
It is understood that Wenger is still actively pursuing the pair even though a high profile transfer such as that of Cavani so late in the day might be regarded as unlikely.
However, the manager has not given up hope of landing a front man and everything is in placed for a medical to take place at Arsenal’s Hertfordshire base.
Wenger has been in the market all summer for an “extraordinary” player who can be catapulted straight into the first team.
Arsenal’s No1 summer target had been Real Madrid’s Karim Benzema, but he did not want to leave the Bernabeu and they subsequently turned their attention to prolific Uruguayan Cavani.
With doubts as to when Danny Welbeck will be fit to play, Wenger accepts that he needs more firepower if Arsenal are to genuinely challenge for the Premier League title.
The Gunners have scored just three goals in their opening four Premier League matches, one from Olivier Giroud and two via own goals.

Giroud got the nod to lead the attack in the first three games but he was overlooked in favour of Theo Walcott for last Saturday’s 1-0 win at Newcastle.
The Arsenal transfer news that Wenger is still trying to buy a striker is a boost for supporters concerned that the manager has only bought one player this summer, goalkeeper Petr Cech in an £11million deal.
Arsenal are also working on a deal to sign Leicester forward Joe Dodoo, who marked his debut last week with a hat-trick in the Capital One Cup.