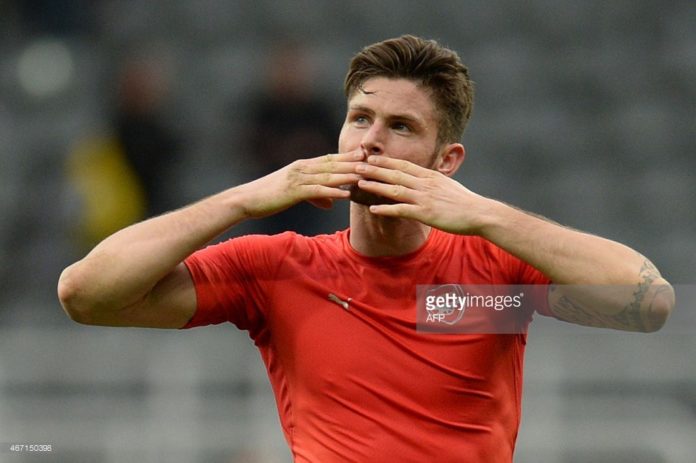 By Arsenal correspondent Tony Hughes
Arsenal’s manager is failing in his duty if he does not spend his club’s vast resources on an elite striker, the Gunners’ passing without Mesut Ozil lacks precision and other things we learned from Newcastle 0 Arsenal 1.

Arsenal need to splash out £40million-plus on A-list striker
In four Premier League matches this season, Arsenal have scored three times, once from Olivier Giroud and two via own goals. If Arsene Wenger was not already convinced of the need to spend some of the club’s vast resources on a new front man, then surely his team’s performances in a shaky start to the campaign should have convinced him. But old habits die hard for the manager. He spends Arsenal’s money like it is his own and refuses to bow to popular demand, or supporters’ calls, for transfers to spruce up his squad. Theo Walcott got the nod ahead of Giroud to start at St James’ Park but failed to convince, missing one excellent opportunity, during his 70 minutes. Neither of the two strikers have looked sharp in the season’s early exchanges. With three days of the window remaining, it would be a dereliction of duty, and massively counter-productive, for Wenger not to recruit a prolific goalscorer from out of the very top drawer. Individually, Giroud, Walcott and the injured Danny Welbeck are fine players who are proven in the Premier League. But only their nearest and dearest would describe them as world-class.

Koscielny is one of the finest defenders in the Premier League
It is testament to the Frenchman’s importance that when Football Insider revealed early on Saturday morning that he had been passed fit to start in the centre of Arsenal’s defence after missing the Liverpool match with a back injury, it considerably increased his team’s chances of emerging with three points from their trip to the North-east. As John Terry’s powers wane and Vincent Kompany’s performance levels fluctuate wildly, it is worth asking whether Koscielny is now the finest centre-back in the Premier League. Certainly, there are few more consistent operators than the 29-year-old. Smooth, mobile, powerful, technically gifted and a fine reader of the game, he rarely has an off day and handles most opponents with aplomb. He is a player at the peak of his powers. In truth, Newcastle proved to be a less tricky assignment than he might have expected. With Aleksandar Mitrovic seeing red after just 16 minutes, the hosts played most of the match with a striker-less formation. It was meat and drink to the classy Koscielny.

McClaren must control Mitrovic
The £13million summer signing looked a red card waiting to happen in his first two Premier League appearances, and the inevitable sending-off arrived just 16 minutes into this clash following a senseless tackle on Francis Coquelin. Steve McClaren described the red as “very harsh” for what was merely a “clumsy” challenge but it is hard to see how Andre Marriner could have made any other judgement. The manager needs to control the Serbia international, a player who clearly operates on the very edge of his emotions.
Arsenal’s final-third passing without Ozil is average
Much is made of the number of technically adept playmakers Wenger has at his disposal. Yet, as was so apparent during Mesut Ozil’s three-month absence last season, the team’s final-third passing when the German is sidelined is worryingly mediocre. Ozil pulls off geometrically difficult passes that most of his team-mates would not even see, yet alone contemplate, and his vision and execution brings the best out of the likes of Walcott, Alexis Sanchez and Alex Oxlade-Chamberlain. Without the playmaker, the pacy trio were far less effective.

Gabriel thrives in one-v-one situations
Arsenal’s team-sheet demonstrated that the Brazilian is the third-ranked centre-back at the club. His performance showed why he is more highly regarded by Wenger than Calum Chambers, relegated to the bench following his shaky display against Liverpool. Where Chambers mind often appears scrambled when opponents run at him, Gabriel offers assurance and solidity. He is also tough. Forwards are finding that the January signing is uncompromising and mobile, a useful combination for any young centre-back. Gabriel thrives in one-v-one situations.