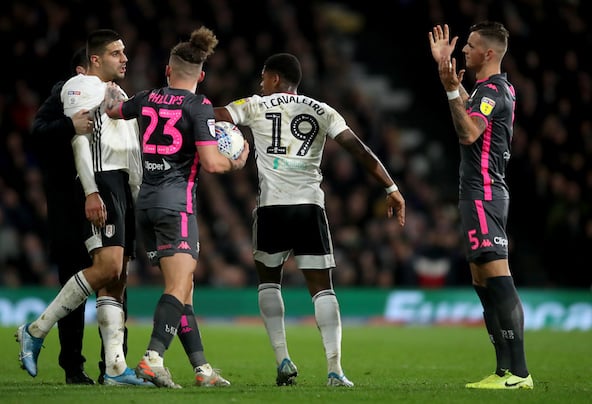 Noel Whelan could not believe that Aleksandar Mitrovic was not sent off in the first half for his off-the ball challenge on Leeds United defender Ben White.

The former Leeds and West Brom striker, speaking exclusively to Football Insider correspondent Dylan Childs, was “very unsurprised” that retrospective action has been taken against the 25-year-old by the Football Association.

Just three minutes into the first half the Fulham striker left an elbow on White which was missed by the match officials at Elland Road.

Mitro has been suspended for three matches. #FFC

The FA have today handed the former Newcastle player a three-game ban for the incident.

Leeds went on to win the game 3-0 thanks to strikes from Patrick Bamford, Ezgjan Alioski and Jack Harrison.

Anything but three points for Marcelo Bielsa’s side would have led to uproar after what Whelan deems as “grievous bodily harm” by the Serbian.

“It was an elbow on Ben White,” he told Football Insider. “It is behaviour that he has been guilty of before.

“White and Cooper had him in his pocket all day long. White went through him very early on in the game and this was something that I think riled Mitrovic up. It was redemption from the challenge that had taken place just moments before.

“It was stupidity, dangerous. He could have fractured his cheekbone, fractured his jaw with the pace and power that he put into it.

“I am very, very unsurprised that he has got a ban.

“That is as bad as what I have seen all season from player. You cannot get away with that.

“If that was on the street it would have been grievous bodily harm.”