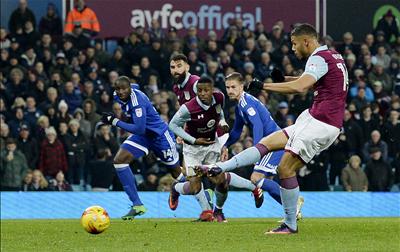 Aston Villa are set to lose forward Rudy Gestede and will chase Brentford forward Scott Hogan as his replacement, according to a report.

The Sun claim that Premier League club West Brom will land Gestede in a £7million deal during the January transfer window, with their manager Tony Pulis confident of agreeing the move.

It is reported that Villa boss Steve Bruce has identified striker Hogan as a January target and the £9million-rated player will fill Gestede’s void.

Gestede has seen his game time restricted this season and has completed 90 minutes in just three of his 18 appearances.

The 28-year-old has scored four goals this campaign and has fallen behind Jonathan Kodjia and Ross McCormack in the pecking order.

He moved to Villa Park in the 2015 and was unable to help the club avoid relegation from the Premier League last season, but now looks set for a January return to the top-flight.

Hogan is considered as the replacement for Villa and the forward has been in great form this season.

The 24-year-old has scored 13 goals in 23 games this campaign for Brentford and is one of the Championship’s in-form players.

He missed the majority of last season through a serious injury, but did manage seven goals in just seven appearances on his return.

Aston Villa should allow Rudy Gestede to complete his move to West Brom if they are confident in signing Scott Hogan as a replacement. Gestede has battled for a starting place during his Villa career and shown that he has great qualities, but is desperate for Premier League football. Steve Bruce can lead Villa to the play-offs this season and they can still manage that without the contribution of Gestede. The forward’s best skills are in the air and team-mate Ross McCormack can certainly match that. The large £7million price tag should allow Villa to reinvest and Hogan has proven this season that he can score goals in the division. Gestede has scored 10 goals in 54 appearances for Villa and just been unable to settle with the Midlands giants.

In other Aston Villa transfer news, these are three players that Bruce wants to sign in the January window.