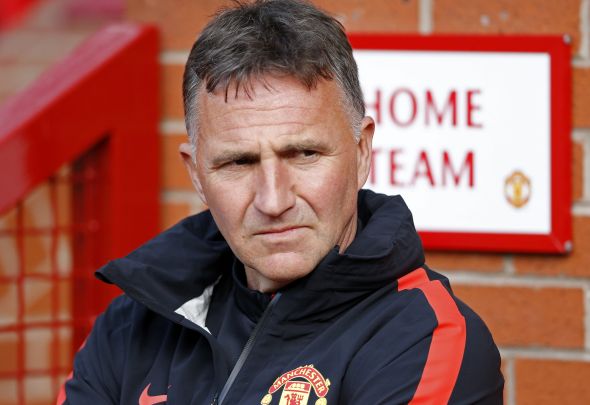 Steve Bruce will look to bring in Manchester United’s development team manager Warren Joyce as his assistant manager at Aston Villa, according to a report.

The former Hull City and Birmingham City manager is edging closer to filling the vacant Villa Park hotseat and replacing Roberto Di Matteo, who was sacked after a dismal run of just one win in 12 league and cup encounters.

The Daily Mail claim that Bruce will be trusted to bring in his own backroom staff, and a move for Joyce will be high on the agenda.

Bruce is also expected to return to Hull to bring in manager Mike Phelan’s current assistant Stephen Clemence, as well as goalkeeping coach Gary Walsh as he lines up his first batch of signings.

Joyce has been manager of United’s development side for an impressive eight years, after being part of a two-man manager team with United legend Ole Gunnar Solskjær for two years from 2008 to 2010.

The 51-year-old took over as boss in 2010 by himself, and has remained in the role since; overseeing the progression of Marcus Rashford, Paul Pogba and Adnan Januzaj into the United first team.

Joyce, who has also had coaching spells with United’s Belgian feeder team Royal Antwerp and Hull City as a player manager between 1998 and 2000, could be tempted to give up the role and join Bruce in attempting to change Villa’s fortunes.

In other Aston Villa news, this international star has picked up an injury and could be a doubt for Saturday’s Midlands clash against Wolves.