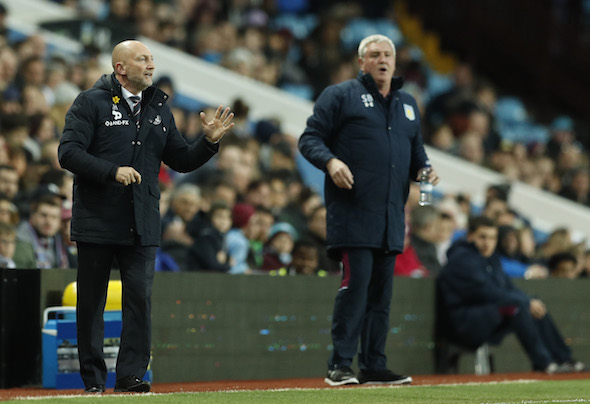 Now, he could make two changes to his starting XI, with the struggling Scott Hogan and Leandro Bacuna making way for Jonathan Kodjia and Conor Hourihane.

Hogan, 25, moved to Villa Park during the January transfer window and has been very unlucky with injuries.

Furthermore, he has not played in his natural position on a consistent basis nor been provided with the service he used to receive when at Brentford.

Therefore, it won’t be a surprise to see Kodjia, who returns from his one-match ban, possibly start against Rovers ahead of Hogan.

The duo of Jack Grealish and Albert Adomah might be selected to provide the service out wide against a team that is battling to face the drop.

In the middle of the park, Bruce might add more creativity by starting Hourihane alongside Henri Lansbury and the powerhouse Mile Jedinak.

Furthermore, he could stick with the same defensive line that kept a clean sheet against Birmingham last Sunday.

The centre-back duo of James Chester and Nathan Baker will be looking to continue their partnership at the heart of the club’s defence.

They might be joined by right-back Alan Hutton and left-back Neil Taylor, who was arguably the best player on the pitch against the Blues.

In other Aston Villa news, Newcastle manager Rafa Benitez has aimed a dig at the Midlands club.