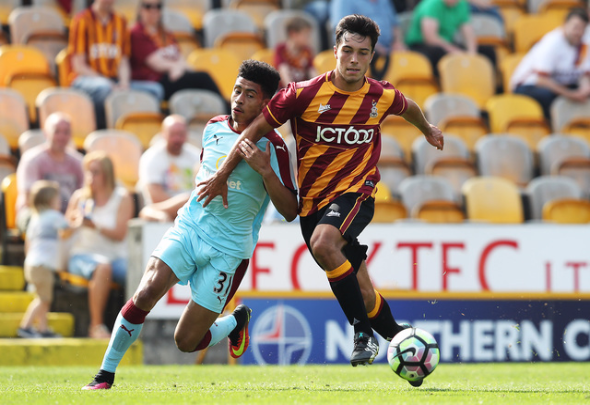 Aston Villa are one of three clubs eyeing a move for Burnley winger Josh Ginnelly, according to a report.

News outlet HITC has named the Midlands giants alongside top flight duo Leicester and West Brom as tracking the 19-year-old.

Ginnelly was released from the Villa youth system in 2013 and eventually moved to Football League outfit Shrewsbury, where he caught the interest of then Championship side Burnley.

He ended up having a trial at the Lancashire outfit before completing a permanent move in an undisclosed deal in the summer of 2015.

He is still waiting to make his senior debut for Sean Dyche’s side, but it is believed that his impressive performances for the Under-23s alongside a loan spell with League One side Walsall have caught the interest of the Midlands trio.

Steve Bruce’s outfit are currently sat in 13th place in the Championship table, a position they would have been disappointed with before the season began.

The experienced manager will now be looking for targets who he feels can help improve the club’s current placing.

Ginnelly has 18 months left on his contract and it is stated that the Clarets are keen to keep him, but he could be tempted away by more first team football.

Ginnelly is unlikely to be an instant success at Villa, but he could prove out to be a very good acquisition in the future. The player has already been a part of the Midlands giants’ side and he is currently proving to be one they regret losing, which could become even worse if they aren’t able to bring him back to the club. Aston Villa are currently playing with Leandro Bacuna and Alberto Adomah as their wide players and despite the latter being a good Championship player, the former is not. Therefore, Bruce should look to seal a deal for the pacey Ginnelly with an added eye on the long-term.

In other Aston Villa transfer news, the club have completed a deal for this defender.