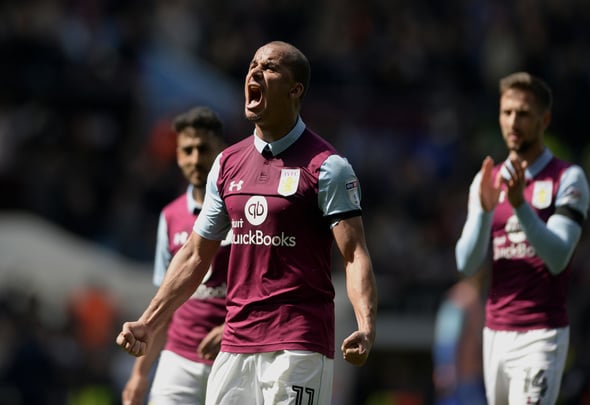 Aston Villa attacker Gabriel Agbonlahor is set to receive a Special Service Award on Saturday ahead of the visit of Derby County to Villa Park and fans are having a field day after hearing the news.

The 31-year-old has been at the Birmingham club since 2005, coming through the youth set-up, and apart from a couple of early loan deals, he has been largely a one-club man.

As such, the Villans are to give the striker the award as he is set to exit in the summer when his contract comes to an end and he will become a free agent.

Gabby Agbonlahor will receive a Special Service award prior to kick-off against Derby.

The striker, who will be leaving the club at the end of the season, will be presented with the award by Kevin MacDonald, his academy mentor.

Agbonlahor has made just six appearances for the Villa this season with one goal and one assist to his name but has faced criticism from fans for his physical appearance, with many slating his weight and fitness.

One member of the Villa Park faithful queried whether the award would be in the shape of a burger while another stated that the player has been “stealing a living.”

Steve Bruce’s side aim to go into the play offs in the best possible form and will be hoping to make it four wins in four on Saturday against the Rams.

Here is a round-up of some of the best Tweets from supporters who are questioning whether the player is worthy of an award:

Genuine emotion felt during that video😢 There was a time you all loved him..yeah he’s not offered much of late but he’s one of our own and has contributed to some great memories.. UTV pic.twitter.com/FUGxZ9WhNr

Is it in the shape of a burger

Is it alphabet book for kids? Or a where wally book instead in where’s gabby? Or a copy of the great train robbery as he’s been stealing a living for years