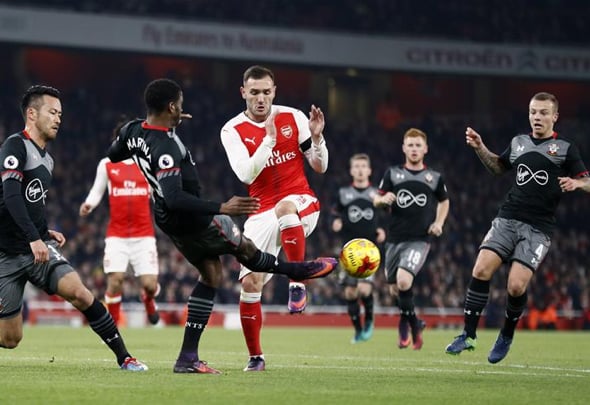 Football Insider analyses three talking points from Arsenal’s defeat against Southampton in the quarter-final of the EFL Cup on Wednesday.

Arsenal’s new attacking signing might protest that he came to London for regular first-team football, but he won’t be getting it on the back of displays like this. Perez, 28, looked off the pace, out of synch and generally lacking in confidence. He has scored two goals in this year’s EFL Cup, but he never looked like making it a third tonight and if he struggles against a second-string Southampton side, it doesn’t bode well for an extended run in the first team, especially considering the form of Alexis Sanchez and Olivier Giroud. Arsenal fans said they needed a quality new striker over the summer. On the evidence of tonight, they didn’t get one.

Arsenal are capable of looking very ordinary. They can be one of the most thrilling teams in the country when they turn it on, but their fans will be all too aware that they can fall way below their best at crucial points in the season. Wenger might have made ten changes to the side that faced Southampton on Wednesday but they should still have enough quality to progress against a Southampton side who themselves made eight changes. They were much better in the second half but why did it take them 45 minutes to wake up? A win against Bournemouth in the Premier League has disguised the fact that Arsenal have now only won one in five. They need to be the side that can consistently reach the dizzying heights, as opposed to the team that ultimately dazzle to deceive.

Alex Iwobi was the one bright spark for Arsenal on a night when nothing seemed to go right. He had a great start to the season but has sat out the last two Premier League matches, with Wenger preferring Aaron Ramsey and Alex Oxlade-Chamberlain out on the left. On the basis of his performance tonight, in a pretty abject Arsenal team, Iwobi deserves another run in the first team.

In other Arsenal news, this star player has been said to be open for a return to his former club, which will alarm fans.