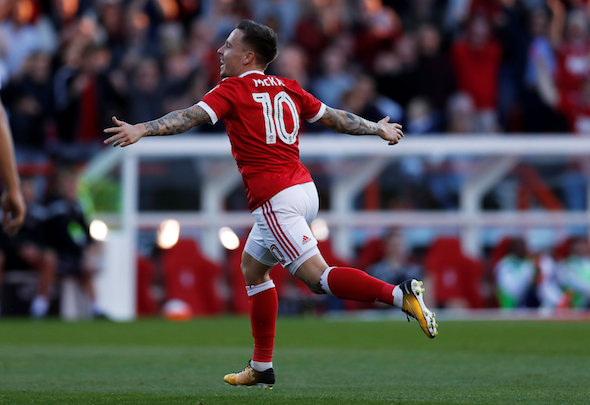 Danny Higginbotham has hailed Nottingham Forest summer signing Barrie McKay as one of the buys of the summer after his impressive start.

Forest manager Mark Warburton prised the attacking midfielder from his former club Rangers after he was deemed surplus to requirements by Pedro Caixinha.

The English Championship club snapped up McKay, 22, for just £500,000 and Sky Sports pundit Higginbotham is convinced that it is money well spent.

The Scotland international has been used as one of three attacking midfielders alongside on-loan Everton ace Kieran Dowell and Ben Osborn behind main striker Daryl Murphy.

‘It is McKay who has caught the eye and looks a bargain at £500,000,” wrote Higginbotham in the print edition of the Sun (8 September, pullout page seven). “Warburton knows him first hand and that is a big help.

“McKay has a great range of passing, is two-footed and suits Forest’s expansive style of play. When he goes down the right he also has a wonderful delivery, which is ideal for a targetman like Murphy. He has an eye for the spectacular, too.

“At 22 he should only improve as well and could play a key part in returning Forest to the top flight after too many seasons of underachievement.”

McKay has scored two goals and supplied two assists in six matches for Forest, with them all coming in his five Championship matches.

At Rangers, he scored 20 goals and provided 39 assists from 140 appearances before Caixinha froze him out in the summer and ordered him to train away from the first-team squad.

In other Rangers news, talks are underway as the club are in negotiations to secure an agreement with central American outfit.