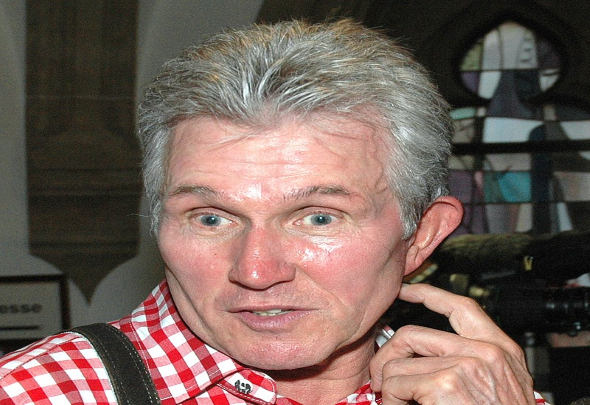 New Bayern Munich manager Jupp Heynckes has bizarrely claimed his dog told him to take over from sacked Carlo Ancelotti at the Allianz Arena.

Heynckes is now in his third stint as Bayern boss and faces a Champions League double header with Celtic over the next few weeks.

The former Real Madrid, Benfica and Borussia Monchengladbach boss takes over with the Bavarians trailing Borussia Dortmund by five points in the Bundesliga.

Heynckes revealed he spoke over the decision with his family before his dog gave it his blessing.

“It’s been a difficult time, but my wife and my daughter said I should do it. My dog also barked twice, so that meant I should do it,” Heynckes said, as quoted by the Daily Record website.

“Despite this difficult phase, I am confident that the team will quickly show a different side.”

Bayern currently sit level on points with Celtic in their Champions League group after a win against Anderlecht before a humiliating defeat at the hands of Paris Saint-Germain.

Two wins against Brendan Rodgers’ side should guarantee the German’s safe passage into the knockout rounds but on current form, Bayern may find it tougher than expected when they visit Celtic Park.

Heynckes managed Bayern between 1987 & 1991 before returning to the club in 2011, leading them to  a Champions League success over Dortmund at Wembley in 2013.

When Heynckes left Munich in 2013, he announced that he was finished with coaching and would be going into retirement but one last spell with Bayern has clearly proven to be too tempting for the 72-year-old.