Leeds United have not signed Japanese striker Yuta Toyokawa after Belgian outfit KAS Eupen confirmed that they have signed him on loan from the Yorkshire club, according to a reliable journalist.
BBC Radio Yorkshire reporter Adam Pope claimed on his personal Twitter account on Friday that Leeds have told him they have not reached any sort of agreement about Toyokawa, 23, in a staggering development after Eupen revealed his arrival.

The Belgian top-flight side announced on their official website on Friday that Toyokawa had been loaned to them from Leeds and will meet up with their squad at a training camp at the Aspire Academy in Doha.
However that no longer appears to be the case, with no official confirmation from Leeds about the deal.
Elland Road has already seen one arrival from Japan this month in Yosuke Ideguchi, however he was sent out on loan to Cultural Leonesa until the end of the season in order to get around the fact he has no work permit.
Football Insider verdict
This really is quite a bizarre thing going on at the moment. No more that a few days that Leeds announce their relationship with Aspire, there already seems to be a complete breakdown in communication between two of their affiliations. With Toyokawa’s deal from Japan it seems that there may have something lost in translation because it’s pretty odd that a player would be signed by the Whites and then loaned out without so much of a whisper from Elland Road. Eupen have signed him from somewhere, but they just don’t appear to have any clue as to where they have signed him from.
In other Leeds United news, the Whites are in the hunt for this Premier League left-back who probably still has Juan Mata in his back pocket.
We’ve launched a << BREAKING NEWS FEED>> exclusively for your club. ‘Like Us’ on Facebook by clicking here if you want 24/7 updates on all Leeds United breaking news. 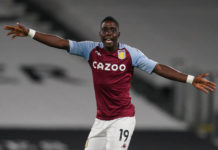