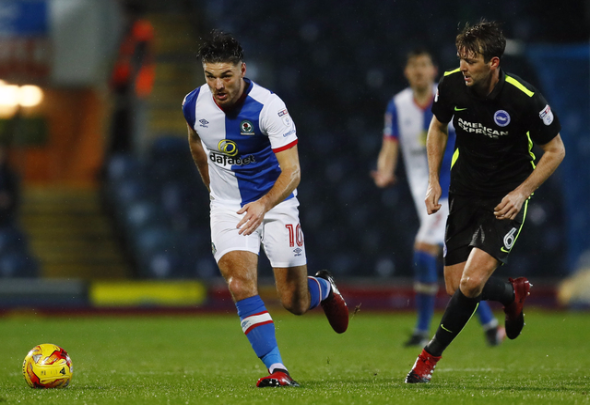 Wolves are still hoping to conclude the signing of Blackburn defender Ben Marshall before Tuesday’s transfer deadline, according to a reliable journalist.

Molineux chief Paul Lambert is a keen admirer of Marshall, having worked with him at Ewood Park last season, and is determined to bring him to Wolves.

The Sun reported on Thursday that the Midlands club had finally agreed a £1.85million fee for the player, who is out of contract at the end of the season.

However, according to BBC Sport’s Pat Murphy, there is no sign of a deal yet being completed between the two sides, and it’s likely to go right down to the wire.

He revealed on his personal Twitter account that Wolves may be reluctant to continue with talks unless Blackburn reduce their £2million asking-price for the 25-year-old, because they could sign him on a free transfer in six months’ time.

Marshall looks certain to leave Blackburn this season after refusing to sign a new deal with the club, a decision which has not sat well with the Ewood Park hierarchy.

The news will be seen as encouraging to Wolves fans as the deal is still alive and Blackburn are unlikely to turn their backs on the cash if they stand to lose the player for nothing at the end of the season.

Wolves have already signed Helder Costa on a permanent deal, following a successful loan spell at the club from Benfica.

✍️ We are delighted to announce that Helder Costa has signed for Wolves on a four-and-a-half-year deal. #CongratsCosta pic.twitter.com/jLt0fgVfQh

Lambert will be working tirelessly to be re-united with one of his trusted, former stars, but he will be keen to ensure that Wolves get the best deal possible. If that means they must wait until the summer to get him, then so be it. Having reportedly splashed out a club record £13million to land Costa, Lambert is not going to pay over the odds to sign a player that is out of contract in just six months’ time. Marshall is keen to leave Blackburn, and remains reluctant to sign a new deal, which will work in Wolves’ favour, as long as they can reach an agreement with Owen Coyle’s side over a suitable fee. He would add greater depth to Lambert’s defensive options for the remainder of the season, and bring reasonable experience with him to Molineux.

In other Wolves transfer news, Lambert is set to miss out on another of his January targets unless this happens.