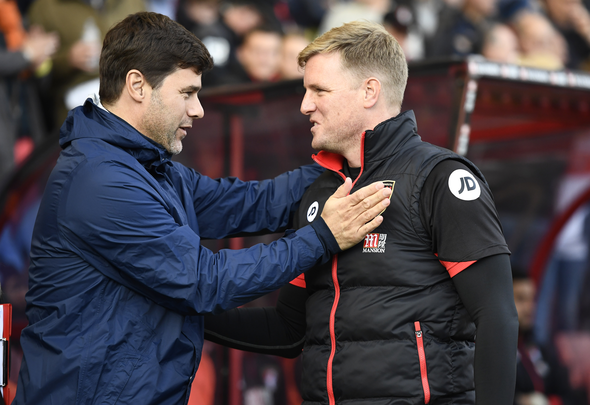 Mark Schwarzer claims Tottenham manager Mauricio Pochettino got frustrated during his side’s win over Bournemouth due to their quality in front of goal.

Spurs managed to record a comprehensive 4-0 victory over the Cherries, but were still guilty of wasting chances in a game they dominated.

The north London club closed the gap behind league leaders Chelsea to four points and were delighted when the Blues suffered a 2-0 defeat to Manchester United.

Spurs have been in great attacking form recently and recorded back-to-back 4-0 wins in the league, but have spurned opportunities to annihilate teams.

BBC pundit Schwarzer believes that Pochettino was annoyed on the touchline at the amount of wasted chances.

“The one thing I’d say is that Spurs weren’t perhaps as clinical as they could be,” Schwarzer said, as quoted by the club’s official website. “I could see Mauricio Pochettino getting a bit frustrated at times on the touchline and I can understand that, because there were times in the game where the team was wasteful in front of goal.”

Spurs may need to be more clinical in their next game when they face Chelsea in the FA Cup semi-finals, with the two London rivals taking a break from their league battle.

They do have a superb attacking set-up at their disposal and Harry Kane, Dele Alli, Heung-Min Son and Christian Eriksen have scored a combined total of 74 goals this season across all competitions.

Spurs are the second highest goal scorers in the Premier League, but Pochettino feels his side can be even more prolific.

In other Tottenham news, Jamie Carragher has delivered his verdict on the club’s title hopes.