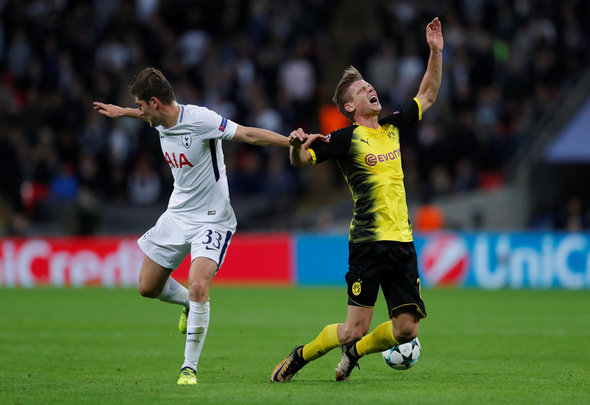 Tottenham defender Ben Davies has warned his team of a Swansea backlash following their defeat to Newcastle and has identified striker Wilfried Bony as a major threat.

Spurs welcome the Swans to Wembley on Saturday for a Premier League clash and will be looking to continue their momentum following the mid-week 3-1 win over Borussia Dortmund in the Champions League.

Mauricio Pochettino’s side also beat Everton 3-0 in their last league match and are beginning to rediscover their top form.

Meanwhile, Paul Clement’s side lost to Newcastle 1-0 in their last match despite summer signings Bony and Renato Sanches featuring.

Ex-Swansea defender Davies is expecting a difficult battle against his former team-mate Bony at the weekend and has warned Spurs of his threat.

“He {Bony] was a top player for Swans when I was their and I bet the club are delighted to have him back,” Davies told talkSPORT reporter Ian Abrahams. “He can cause a lot of problems for whoever he is against and we will have to be ready for him.

“It was quite a surprising result [Swansea v Newcastle], I expected them to do well but it wasn’t to be and we are just going to have hope there is no backlash from that result at the weekend.”

Davies has become a key player for Spurs during Danny Rose’s absence through injury and is an ever-present at left wing-back.

The 24-year-old previously spent two years at the Liberty Stadium learning his trade and played with Bony.

The striker has returned to Swansea for a second spell and will be hoping to rediscover his top form.

Bony is a fan favourite at the Swans after scoring 35 goals in 71 appearances for the Premier League side.

Spurs defenders Toby Alderweireld, Jan Vertonghen and Davinson Sanchez will be well aware of the centre-forward and hoping to keep him quiet.

In other Tottenham news, Paul Merson has predicted their league clash against Swansea.