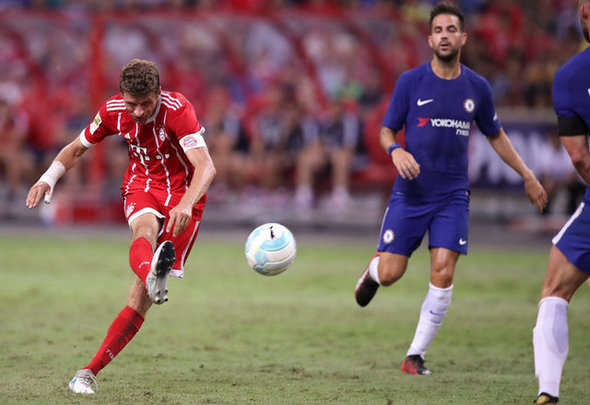 Liverpool have been installed as the favourites to sign Bayern Munich forward star Thomas Muller this summer, according to the latest bookmakers’ odds.

Sky Bet have priced the Reds at 8/1 to sign the 27-year-old Germany international before the September transfer deadline.

Chelsea trail behind the Merseyside giants with odds of 16/1, while Arsenal and Paris Saint-German are also in the running at 18/1 and 20/1 respectively.

The odds follow on from a report from German newspaper Bild in July claiming that Jurgen Klopp was eager to sign the experienced attacker.

The Reds manager would have also been able to get a good eye on Muller on Tuesday evening as he played the full 90 minutes of the Audi Cup clash at the Allianz Arena, which resulted in a 3-0 victory for Klopp’s team.

Muller has enjoyed much better games while at Bayern Munich and since breaking through the youth and B team ranks he has played 395 times in total for the club, returning 161 goals and 133 assists.

He has helped Bayern Munich to six Bundesliga titles in that time alongside the 2013 Champions League trophy.

Muller has also had a fine international career winning 85 caps for Germany, which have brought a return of 37 goals and he led his country to the World Cup in 2014.

The attacker still has four years remaining on his contract at the Allianz Arena and he would be considered quite the coup for Liverpool this summer.

In other Liverpool transfer news, an English club have switched their attention from one Reds attacker to another.