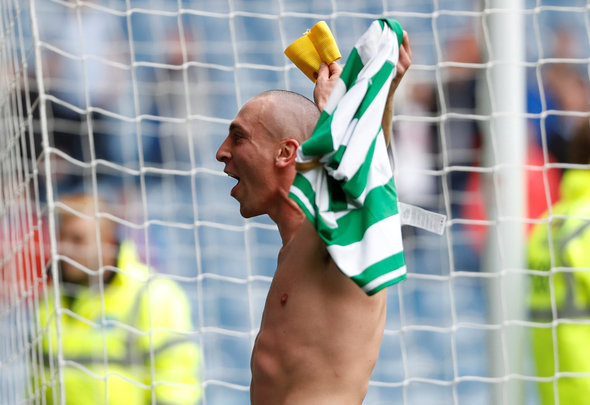 COMMENT
Celtic captain Scott Brown has been looking back for once, to the seventh anniversary of his iconic celebration after scoring against Rangers at Ibrox in 2011.
The player uploaded a clip of the celebration, which was pulled off in front of the Gers’ El-Hadji Diouf, to his official Instagram account, as well a brief reflection of the incident.
“7 years ago today and still going strong”, said the 32-year-old.

The incident, a favourite of Celtic fans, helped to solidify Brown in the eyes of the support; before it he was an important player for the Hoops, since then he has become the main man in the team.
He is the figure that drives the team on, and when he does not play the entire team suffers.
Brown’s influence on the team can be seen since the arrival of Brendan Rodgers as manager, where he helped the Hoops to an unbeaten league season and first domestic treble since 2001.
His performances were in complete contrast to those in 2015-16, where he struggled with injury in a poor side under the management of Ronny Deila.
However Brown is now the fulcrum of the side, who will be hugely missed when he eventually retires, and all that can be traced back to his goal and celebration at Ibrox seven years ago.
In other Celtic news, Scott Brown delivers message to Celtic fans on anniversary of ‘Broony’ v Rangers
Don’t miss out on breaking and exclusive Celtic news by clicking here for our brilliant 24/7 updates on Facebook, Instagram and YouTube