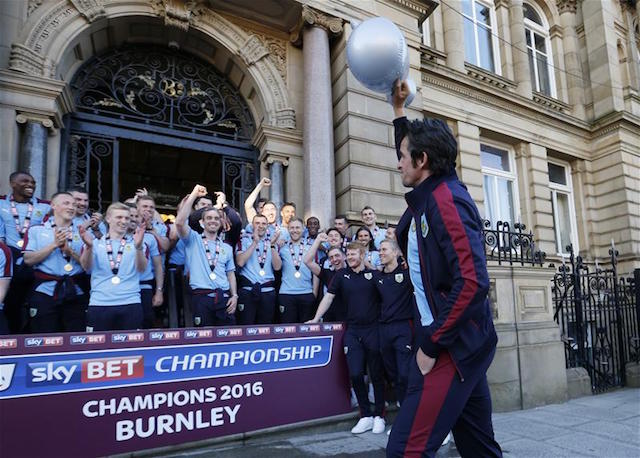 Burnley manager Sean Dyche has recognised the “clout” of Rangers as they prepare to spend big to entice Joey Barton to Ibrox.

Dyche said the 33-year-old former England international is “not cheap” and the Scottish giants’ interest in the player demonstrates their ambition.

Barton could be on the verge of a sensational transfer to Rangers after travelling to Glasgow for talks on Saturday.

As revealed by Football Insider, Rangers have offered Barton a three-year contract in a bid to entice him to the Scottish Premiership next season.

The midfielder has been in talks over a new deal with newly-promoted Burnley after helping them return to the Premier League at the first attempt.

But Barton is out of contract in the summer, and without a firm agreement in place with Burnley, his future remains up in the air.

“Fair play to Rangers, it shows the clout they have, because if they’re talking to him, he’s not cheap,” Dyche told Sky Sports’ Goals on Sunday programme. “It shows their intentions if they see it as viable, they must be backed well.”

Dyche stressed he has not given up hope of retaining the midfielder’s services next season.

“We’ll give him as long as he needs,” Dyche told Goals on Sunday. “He took time to come to us last year, there were a couple of different things and he wanted to make sure it was the right place and environment.

“He’s got some deep thoughts on what he thinks is correct. I’ve worked with him, not against him, one of the first things people said was ‘how are you going to handle him?’

“I’ve said all along, he’s a man, not a boy, his contract runs out this summer, he knows our position on it and he’s got his chance to look around and do what he needs to do.

“I’ve absolutely no problem with Joey, he’s been terrific for me, terrific around the place, but he’s a man and he’s got his own future in his hands and he’ll make a decision on that.

“We’ve been open with our conversations with him, and his advisor, but he’s still got his chance to look around and that’s what players do nowadays. They’re open minded to what’s out there.”

The Championship winners had been willing to offer the 33-year-old a one-year deal as well as another crack at the Premier League.

The former Manchester City, Newcastle, QPR and Marseille star will have to weigh that up against the more long-term contract on offer from Rangers.

Barton has been a revelation for Burnley this season as they secured promotion to the Premier League. He made 40 appearances and was named the club’s player of the year in what was a persona and collective triumph.

Speculation that Barton could be heading for a career swansong with Rangers initially met with scepticism last week in Glasgow, where supporters appreciate that more wealthy clubs down south can offer Barton a more lucrative package.