Kevin Campbell has laid the blame at Rob Holding’s door for the goal which helped Manchester City beat Arsenal on Sunday.

City’s Raheem Sterling scored the only goal of the game after just three minutes – a free header from just six yards out. 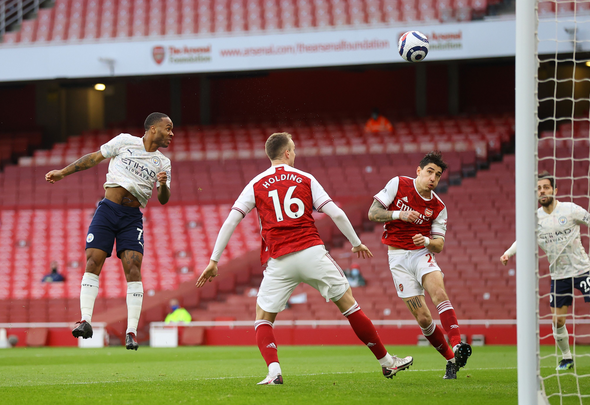 In an interview with Sky Sports, Arsenal boss Mikel Arteta bemoaned his side’s defending and described it as a goal “you cannot concede”.

Campbell is “very disappointed” by the manner in which Sterling was allowed to score.

“You do not mind Sterling picking the ball up, beating a couple of players and sticking one in the top corner,” he told Football Insider correspondent Dylan Childs.

“But, a header inside your six-yard box? Raheem Sterling? Come on! This schoolboy stuff. This is basics.

“Whatever happens you do not let him get a free header inside your six-yard box. It is very disappointing way to concede a goal. It is tough to take.

“Holding was the person closest to him and that is something he will need to look at and clear up.”

Speaking after the 1-0 loss, Mikel Arteta told Sky Sports: “It’s a cross and Raheem Sterling cannot head a ball there. You cannot concede that goal.

“It was a tactical thing that we were prepared for but we didn’t read it in the game.”

In other news, Paul Robinson in awe of ‘phenomenal’ Arsenal loanee Ainsley Maitland-Niles amid an intriguing stats reveal.