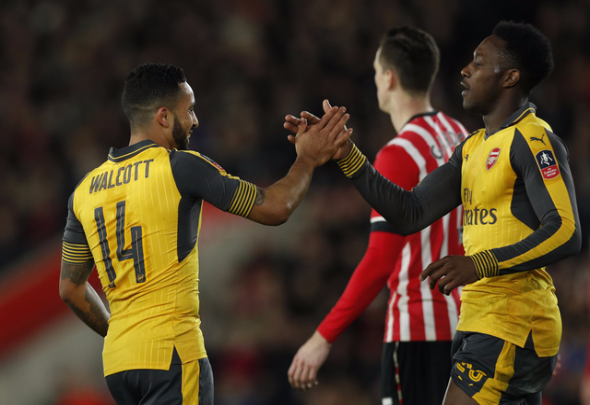 The Gunners travelled to the south coast for an FA Cup fourth round tie against the Saints at St Mary’s stadium.

Claude Puel made a lot of changes after his side battled to victory over Liverpool in midweek and both Welbeck and Walcott took full advantage.

The former bagged two goals in the opening half hour in his first start for Arsenal since May, while Walcott found a hat-trick against his old team in the 5-0 victory.

Cazorla, watching from the sidelines through injury was full of praise for his teammates and expressed his delight on his personal Twitter account after the match.

“Well done boys,” wrote Cazorla, while identifying both Walcott and Welbeck in his tweet.

Cazorla, 32, has played just 11 times for Arsenal in all competitions this season after suffering an ankle injury.

He has not featured since a mid-October match against Ludogorets in the Champions League and with his contract set to run out in the summer he will be keen to return as soon as possible.

In other Arsenal news, fans also reacted on Twitter to Welbeck’s display in the match on the south coast.