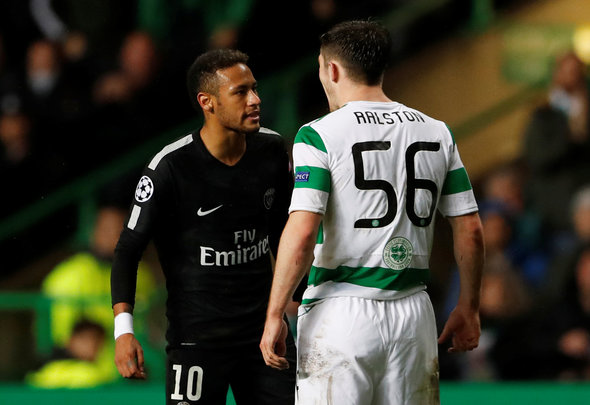 Celtic fans have gone berserk on Twitter after it was confirmed that Anthony Ralston had joined Dundee United on loan for the rest of the season.

The Scottish Championship club announced on their official website on Friday that Ralston, 19, has moved to Tannadice on an emergency loan after the Hoops gave him the green light to leave.

Ralston is very highly-rated among the Parkhead faithful and many have been urging Brendan Rodgers to call on the teenager in the wake of Mikael Lustig’s poor form and recent suspension.

However the Scotland Under-21 international has been seemingly well down the order, despite being relied upon to mark the £198million-rated Neymar when Celtic clashed with Paris Saint-Germain in the Champions League earlier this season.

Supporters are clearly not happy with the club’s decision to allow Ralston to leave on loan, especially as the final weeks of the Scottish Premiership season may have offered the chance for him to earn first-team experience by staying put.

One fan labelled it as a “shocking decision” by Celtic for allowing the deal to take place.

This some sort of a joke?? He should be in the first team here on a regular basis !!

Strange decision! The RB position is getting weaker. 🤦🏼‍♀️

Strange decision. We are not exactly strong in the RB position and if Tony is fit now would be a good time for us to be playing him.

You’re joking, we need him

Really poor decision, RB is a problem position for us. Lustig (who i love ) is past it now and Gamboa has not had a fair run in the team so i would have kept Tony.

Ralston has not featured for Celtic very often this season but the defender has still managed to make seven appearances in all competitions, scoring one goal and supplying two assists in the process.

In other Celtic news, the Hoops are plotting a record-breaking summer swoop for this lethal finisher in the summer.