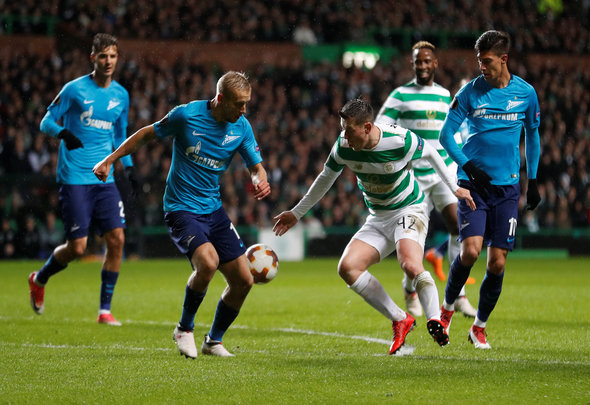 Celtic fans have taken to Twitter to slam Callum McGregor for his performance in the first-half of the 1-0 win against Zenit St Petersburg at Parkhead on Thursday night.
McGregor, 24, was surprisingly called back into the starting line-up by manager Brendan Rodgers prior to kick-off as January signing Charly Musonda was axed after underwhelming performances in his last two outings.
McGregor was blasted by fans in the opening stages of the game, but as the tie developed, he proved to be the main man and scored what turned out to be the winning goal.
One disappointed Bhoys supporter claimed that McGregor was “terrible” against Zenit, while another pointed the Scotland international out as being the “weak link”.
Here is a selection of their tweets:

McGregor is annoying me

McGregor is getting into good positions but his touch is, yet again, letting him down. Dembele looks positive early on.

If McGregor was playing against us I'd have wanted him off already for two dives.

Really poor from McGregor there

McGregor has been ever-present for Celtic this season.
The attacker has made 39 appearances in all competitions, scoring seven goals and supplying eight assists.
He also earned his maiden senior international cap for Scotland in November when he started in a 1-0 friendly defeat against the Netherlands at Pittodrie.
After Rodgers signed Musonda on loan from Chelsea in January it seemed that McGregor was doomed to spend the rest of the season playing as a bit-part player, but it seemed that the Celtic manager was not afraid to axe the big signing in favour of the academy product.
In other Celtic news, Rangers-mad Jim White has made a bold claim in the debate surrounding this Hoops senior man.
Don’t miss out on breaking and exclusive Celtic news by clicking here for our brilliant 24/7 updates on Facebook, Instagram and YouTube.