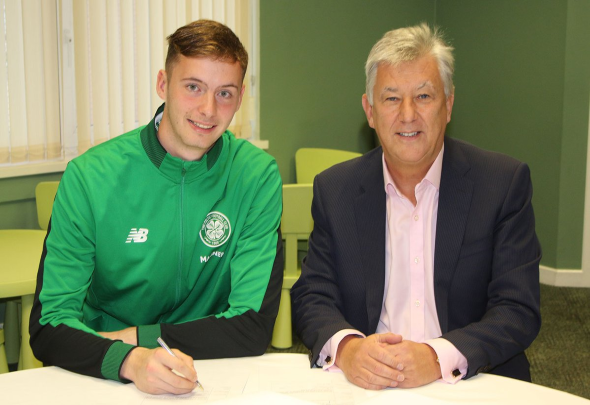 Young Celtic keeper Conor Hazard, who is on loan at Falkirk, is set to play at Ibrox after Falkirk reached the quarter-finals of the Scottish Cup.
Falkirk beat Cove Rangers 3-1 in the round of 16 to earn the tie against Rangers, and the young Hoops starlet will be hoping to inflict some damage to the Gers.
Hazard took over as Falkirk’s number one since making his temporary Parkhead exit late on in the January transfer window.
Paul Hartley’s men currently sit eighth in the Scottish Championship, and seemingly with no hopes of going either up or down, Falkirk can afford to give it their all in the cup.
Hazard only has two appearances for Falkirk, starting in goal versus Brechin in the league, and in the cup game, where both results were 3-1.
The 19-year-old has been a lifelong Celtic fan, and had his boyhood dream realised in 2014 when he joined the academy system, suggesting he would love to one up the Gers by knocking them out of the cup.
The game is set to be played on the third of March, but no kick-off time has yet been announced. A trip to Hampden awaits the victor.
In other Celtic news, the Hoops have been boosted in their Europa League hopes as this Zenit star might not play.