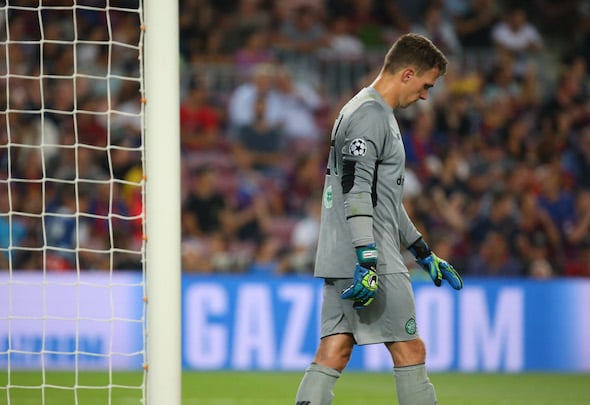 It is fair to say that Celtic’s loan capture of Scott Bain in January was something a knee-jerk reaction but he has managed to hit the heights expected of him already.

The 26-year-old was brought into Parkhead to compete with Dorus de Vries for a first team spot after Craig Gordon was ruled out with a long-term injury, and after beginning his career behind the Dutch stopper has taken charge between the sticks.

Thrown into the deep end by Brendan Rodgers with a debut in the 3-2 victory over fierce rivals Rangers, he followed it up with his first clean sheet against Motherwell, before the international break came along.

The two week gap may well have given Celtic fans time to evaluate what the goalkeeper has brought to the side, and they will no doubt have been impressed as to how well he has settled in.

So is it time to start considering a permanent move?

Well, the Daily Mail report that the Bhoys are very keen on securing his services come the end of the season, when he will become a free agent, and the player himself has already confirmed his plans to try and seal a long-term future at Parkhead.

Bain was quoted by the club’s official Twitter account as saying: “I’d love to stay here and if I continue to play well then it stands me in good stead.

“Rather to get it done sooner than later.”

🗣️ SB: "I’d love to stay here and if I continue to play well then it stands me in good stead. Rather to get it done sooner than later but it’s not a priority right now, it’s just a priority to play well and do well for this club."

The loanee’s comments and reports of Celtic’s interest make a summer swoop a near-certainty, but it also sounds the death knell for a first team veteran; his rival shot stopper de Vries.

The 37-year-old has a contract until 2019 but with Gordon and Bain likely to remain at the club, his head is firmly on the chopping block.

A series of sub-par performances, especially in the Europa League, were what led to the loan goalkeeper taking his place in the first team, and now it looks as though his fate has been sealed, after just 15 appearances for the Hoops – but his exit will come as no great loss as fans look toward a future with Bain.

In other Celtic transfer news, a Twitter spat has led to Tam McManus backing a swoop for a top flight maestro.