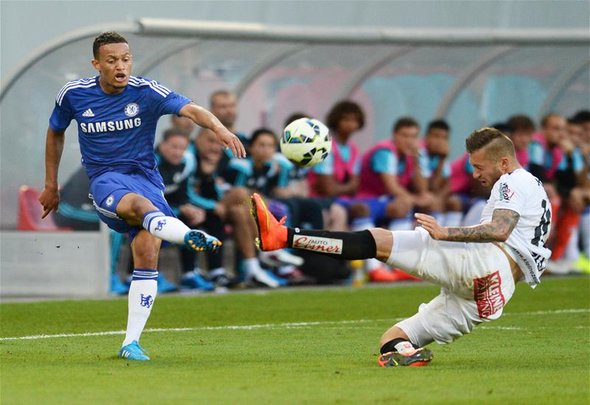 Championship side Middlesbrough are on the verge of signing Chelsea starlet Lewis Baker in a two-year loan deal, according to a recent report.

The Sun has revealed that Boro boss Garry Monk is leading the race to secure the 22-year-old and hopes to recruit the youngster as a replacement for Atalanta-bound midfielder Marten de Roon.

The newspaper claims that Antonio Conte is keen to loan the midfielder out for a fourth spell away from Stamford Bridge, and Middlesbrough are the front runners.

The Teessiders have made considerable additions to their squad this summer and are expected to challenge for the Championship title this season.

SkyBet currently has Middlesbrough as 13/2 favourites to win the title this term despite losing their first game against Wolves on Saturday.

Baker joined the Chelsea academy in 2005 and has since grown through the ranks at the club, but has failed to make an appearance with the senior squad since his debut back in January 2014 where the starlet played in the Blues’ FA Cup tie against Derby.

Since his debut at Stamford Bridge, Baker has been on short loan spells with clubs such as Sheffield Wednesday and MK Dons, and most recently ventured to Holland side Vitesse for two seasons.

While at the Eredivisie outfit the Chelsea starlet flourished and had his most successful season during the 2016/17 campaign where he managed to net 15 goals and provide seven assists during his 39 appearances for Vitesse, which helped them secure their first ever Dutch Cup.

While another loan deal would guarantee more playing time for Baker, his potential two-year loan spell would take him up to the end of his Chelsea contract in 2019, which could mean the end of his time at Stamford Bridge. Now is a better time for Conte to use and develop young stars at the club as he has openly spoken about his frustration at the club’s lack of transfer activity over the summer, and rather than sign new players he should look to his own development stars, like Baker. The 22-year-old plays in a central position and has shown that he can play in both an attacking and defensive midfield role. With Nemanja Matic now at Old Trafford, Conte could test the waters and try the Englishman in some smaller games to see whether his potential is enough to allow him to regularly feature for the Blues.

In other Chelsea transfer news, the club have submitted a huge bid for PL playmaker.