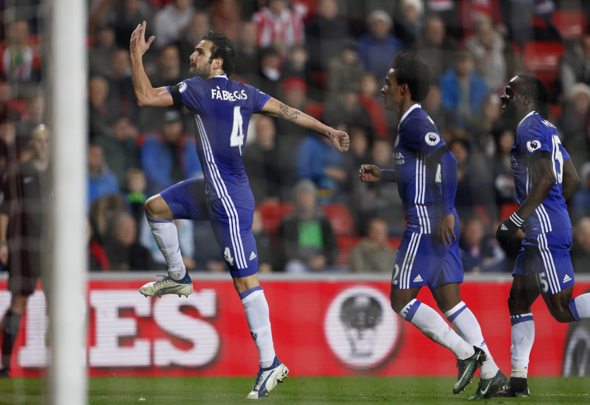 Cesc Fabregas scored the only goal in the Premier League game against Sunderland on Wednesday night, and Chelsea fans took to Twitter to celebrate.

Fabregas proved that he could play a vital part in what is looking like a serious tilt at the title from Chelsea.

The 29-year-old enjoyed a fantastic performance at the heart of the Blues cut and thrust, and was simply superb on the ball.

With Eden Hazard out, Fabregas stepped up to the plate and provided the spark that Chelsea needed to move six points clear at the top of the Premier League.

Fabregas hinted at more to come when he was interviewed after the game.

Talking to the BBC afterwards Fabregas said, “It’s the second time in my career that I have played this system. I’m getting used to it and I am feeling very comfortable.”

Chelsea fans were delighted with his display and will be hoping for more. Here is a selection of their messages:

Ooh Fabregas is magic he wears a magic heart!!!

Cesc Fabregas was outstanding tonight. Fantastic player! What a save by Courtois! Let's ride on….Blue is the colour. #bbcfootball

Chelsea’s next game is away at Crystal Palace in the early kick-off on Saturday. If they win that they will be nine points clear at the top and setting a pace that their rivals just can’t keep up with.

In the form they’re on, it’s hard to see where they’re going to drop points next.

In other Chelsea news, this 29-year-old is the ace in the pack: Three things we learned from Chelsea’s win v Sunderland.