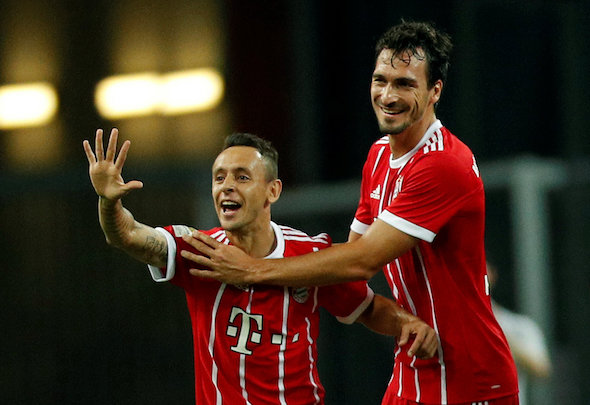 Chelsea are interested in signing Bayern Munich defender Rafinha this summer, according to a report.

German news outlet Bild claims that the Premier League champions are planning to make a last-ditch attempt to sign the 31-year-old before the transfer window shuts on Thursday.

The newspaper reports that Bayern boss Carlo Ancelotti would not be willing to sanction the move as he believes that the full-back can provide the team with extra cover this season.

The report also claims that the Bundesliga champions are concerned that they will be unable to find a replacement for the Brazilian with the window shortly coming to an end.

The defender has only started one league match this season and he is reportedly seen as the back-up choice to Joshua Kimmich.

Rafinha has enjoyed great success with Bayern since securing a permanent move in 2011, picking up five consecutive Bundesliga titles and lifting the Champions League at Wembley Stadium in their treble winning season during the 2012-13 campaign.

The right-back currently has one year remaining on his contract at the Allianz Arena.

Chelsea boss Antonio Conte appears determined to add more faces to his side before the summer transfer window closes. Rafinha would be a fine addition to the squad as he has spent the majority of his career at the highest level winning trophies with Bayern. The Brazilian would also add cover to the right-back role at Stamford Bridge which is currently occupied by Victor Moses. With the Blues set to compete in the Champions League this season, they are going to need a far bigger squad in order to cope with the demands. Although Bayern seem unwilling to do business, if they are serious about their pursuit, Chelsea need to act quickly and also persuade the player himself that he will be a regular in West London this season.

In other Chelsea news, the club have been handed a huge injury boost as winger is called up for international duty.