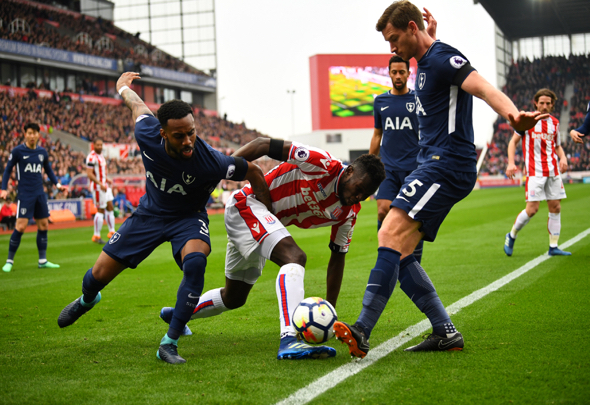 Tottenham fans were left drooling over the performance of centre-back Jan Vertonghen after a masterful first-half display v Stoke.

Vertonghen often gets overlooked in the Tottenham defence, but was absolutely brilliant in a dominating first 45 minutes at the bet365 stadium on Saturday.

And it didn’t go unmissed by fans who are normally concentrating at what’s going on at the other end.

Chances were few and far between in the first 45, although Heung-Min Son should have put the visitors ahead when he was through one on one.

However, a fine save by Jack Butland denied him and kept the score at 0-0 despite the return of Harry Kane.

However, Vertonghen was the real star of the first half and fans took to twitter to celebrate.

Here are the best reactions from delighted Tottenham fans who might not be so sad about losing Toby Alderweireld if Vertonghen keeps on playing like this:

Vertonghen is in Super Jan mode. Would love to see him get a goal today.

Jan Vertonghen not for the first time this season completely embarrassing the opposition he’s faced.

Hands-down the best Premier League defender this season, would even rival that term in Europe too, he’s been immense all campaign.#THFC #COYS

Vertonghen has been an absolute rock again so far

Vertonghen making the Stoke defender fall out of his boots 👍👍👍

Vertonghen is my hero.

Jan Vertonghen is the best CB in the world pic.twitter.com/Nxw7nIh90l