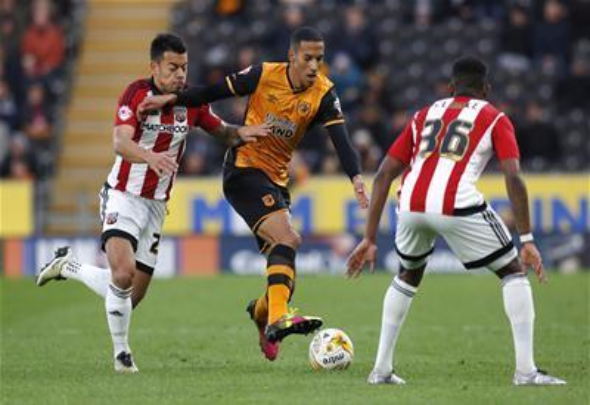 Newcastle have completed the signing of Isaac Hayden from Arsenal, it was announced on Monday.

The Magpies confirmed on their official website that the versatile youngster put pen to paper on Monday morning and will now join up with the squad for their pre-season tour of Ireland.

The 21-year-old has Championship experience after making 24 appearances for Hull last season as they promotion via the play-offs.

Hayden has penned a five-year contract with Newcastle after completing a transfer that will reportedly cost £2.5million.

CONFIRMED: Newcastle United have signed @IsaacHayden65 from @Arsenal on a five-year deal

The youngster came through the ranks at Arsenal, making his debut as a teenager in 2013 in a League Cup tie against West Brom.

He can play at centre-back or full-back, but demonstrated his versatility when he spent the second half of last season on loan at Hull in a midfield enforcer role.

Hayden spoke of his delight of signing for a big club where he believes he can progress his career.

“Newcastle is a massive football club and to be given the opportunity to come here and progress my career is fantastic,” Hayden told Newcastle’s official website.

“I am still young but I want to get as many games under my belt as I can and help the team bounce back to the Premier League.”

The defender becomes manager Rafa Bentiez’ fifth signing of the summer after striker Dwight Gayle and winger Matt Ritchie both left the Premier League to join up with the Championship club, while Spaniard Jesus Gamez and goalkeeper Matz Sels have also joined the Tyneside revolution

The former Real Madrid boss was pleased to bring in more determined players for the forthcoming season as he prepares to guide the club to promotion after relegation last term.

“We continue with our plan to bring in players who are hungry to succeed and prove themselves, which Isaac really is,” said Bentiez. “He is also a player who can play in different positions, which is very useful.

“Isaac is a young, strong English player with fantastic potential but also with some experience already of the Championship. We welcome him to the Club.”

In other Newcastle news, Bentiez is one of a number of managers who is interested in a highly rated Liverpool youngster who is the subject of a £15million bid.