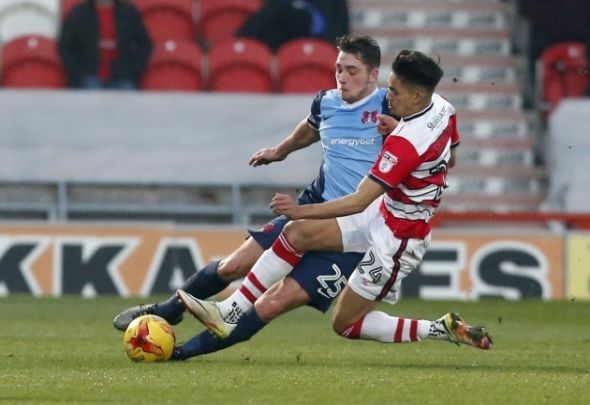 Aston Villa youngster Niall Mason has extended his loan at Doncaster until the end of the season.

The 19-year-old made the temporary switch from Villa Park to the League Two side in the summer, originally keeping him until January.

But, the official Doncaster Twitter page revealed on Thursday afternoon that the two sides had reached an agreement to extend his deal until the season’s end.

NEWS | Niall Mason has extended his loan to stay with #DRFC until the end of the season. pic.twitter.com/0cWvf7GLmA

Mason has so far had a colourful career, playing in the youth teams of Real Madrid, Al Sadd, Blackburn and Southampton before moving to Villa in 2015.

He is also eligible to play for India, United States and England at international level, but he has previously stated that he would choose England if the opportunity arose.

The defender has not yet made his debut for Aston Villa, but he has earned plenty of experience in Yorkshire this campaign.

The young star has played 18 times for Doncaster in all competitions, helping Darren Ferguson’s side sit top of the League Two table.

They are currently only above second placed Plymouth on goal difference, but they do sit in the automatic promotion spots by a clear seven points.

Mason will now be keen to play a vital role in helping Doncaster maintain their high standards in the second half of the season with a return to League One the target.

It’s for the best that Mason stays out on loan for the second half of the campaign. He is currently earning some vital experience in a winning team and if Doncaster do secure the title it will only benefit him when he does return to Aston Villa. He is currently unlikely to get much game time in Steve Bruce’s team with Nathan Baker, James Chester and Tommy Elphick all in the side’s centre-back ranks. Also if Mason is unable to make it at the Midlands giants then at least clubs will now be aware of his capabilities after playing in the Doncaster first team, aiding his career as a whole.

In other Aston Villa transfer news, Villa have fielded a new striker approach.