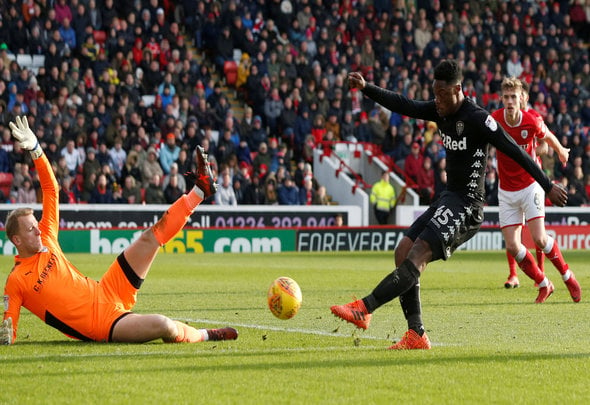 COMMENT
Leeds United have confirmed that January signing Tyler Roberts is set for an elongated spell on the sidelines after picking up an ankle injury which requires medical attention.
The Whites revealed the hammer blow via their official website, confirming that the 19-year-old will be forced to visit a specialist for the cracked shin bone and that there is currently no return date set, which will be a hammer blow for his hopes this season.
Roberts has not made a single appearance for the club but was expected to make his debut in the clash against Bristol City this weekend, something which is now not going to happen.
His inclusion in the first team set up would have meant that one of the attackers already in the squad would have had to drop out, and that would have meant one of either Caleb Ekuban, recently returning from injury, or fellow summer signing Pawel Cibicki, both of which have struggled following their arrivals at Elland Road.
Manager Paul Heckingbottom obviously thought that Roberts could have an influence on the game against City but with him now missing for the foreseeable future, the Leeds duo have got to step up to the plate and start impacting more than they have in recent times.
Ekuban has been unlucky with injuries this season, missing two hefty chunks of matches as a result, and he will be desperate to build up some regular game time in the coming weeks.
Cibicki meanwhile has faltered for much of the season, having failed to net a goal in his nine outings across all competitions.
However, the pair look set to remain as the understudies to Pierre-Michel Lasogga, and as such it is down to them to lift their game and prove to the manager they are worthy of retaining their place when Roberts eventually returns.
In other Leeds United news, one man’s dreams of Elland Road success have been dashed by one January decision.