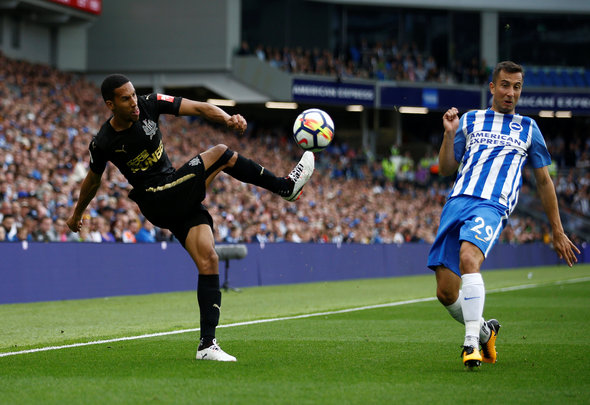 Newcastle United midfielder Isaac Hayden has revealed that the club manager Rafael Benitez “has drummed it” into the players to avoid losing football matches at all costs.

The Magpies secured promotion to the English top-flight after topping the Championship league table last season and they have enjoyed a great start to the new campaign.

The Tyneside have only lost one of their last Premier League games, winning three and picking up a well-earned draw against top four chasing Liverpool before the international break.

Newcastle currently find themselves in ninth position and they are already four points clear of the relegation zone.

Speaking to the Northern Echo, Hayden has credited his manager for the team’s fine start to life back in the Premier League.

“We’ve got a really good team here in terms of the ethic and the values we have, and we also have real quality too,” he said.

“The attitude stems right from the manager.

“His core value is to not lose games, and he’s drummed into us that that has to be the starting point for whatever we’re doing.

“He’s always telling us, ‘Don’t put yourself out of games – always give yourself a chance to win’. We’ve all bought in to that. The lads that he’s brought in – not just this season, but also last season – all have good characters.”

Hayden, 22, has featured in every Premier League match for the Magpies this season.

Although the youngster has not managed to provide a single goal or assist, he has been impressed in the central midfield role just in front of the back four.

It is the first time that the midfielder has enjoyed a successful spell of games in the Premier League despite being an academy player at Arsenal for five years.

Hayden is likely to feature once more when Newcastle face Southampton at the St Mary’s Stadium next weekend.

In other Newcastle United news, fans questioned Benitez’s call to sell this player after his international heroics on Friday.