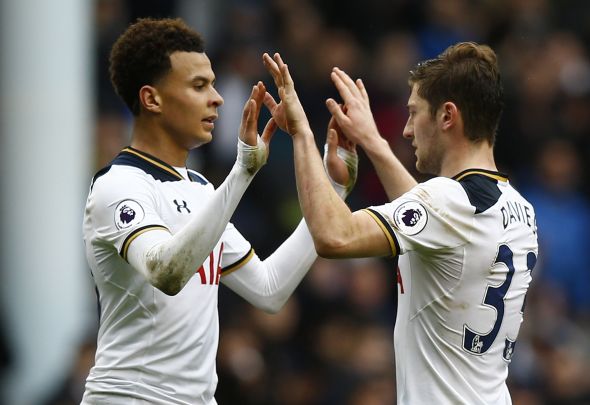 The duo have featured regularly on the flanks for Pochettino’s side since the Argentinian reverted to a three-man defence this season, and are likely to start against Arsenal on Sunday.

Higginbotham identified both Walker and Davies as the two players that have turned Spurs into a force to be reckoned with in the league, despite sublime form of Harry Kane and Dele Alli.

In his Sun column, former Premier League defender Higginbotham claimed that Sunday’s north London derby is intriguing because both sides will set up with the same formation.

Higginbotham described Walker and Davies as “sensational”, and believes their displays have turned their side into a real driving force in the Premier League.

“What makes it so interesting from a tactical point of view is that the two sides will be essentially deploying the same formation: 3-4-2-1,” Higginbotham said.

“For Tottenham, this is the system that suits them best. They have been drilled meticulously by Pochettino on the training ground throughout the season.

“Their wing-backs — Kyle Walker and Ben Davies, in the place of the injured Danny Rose — have been sensational and turned the club into a real Prem force.”

Former Swansea left-back Davies has come into the side following Rose’s long-standing ankle injury, which has ruled the England international out of action since January.

However, Rose could return to full fitness ahead of Sunday’s clash, leaving Pochettino with a selection headache over who to pick on the left side of defence.

Pochettino will be desperate to see his side go one better than the reverse fixture, after drawing with Arsene Wenger’s side back in November at the Emirates Stadium.

Three points could see Spurs move just one point behind league leaders Chelsea, if the Blues lose to Everton at Goodison Park.

In other Tottenham news, Graeme Le Saux has predicted the clash between the two local rivals as well as giving his verdict on Spurs title chances.