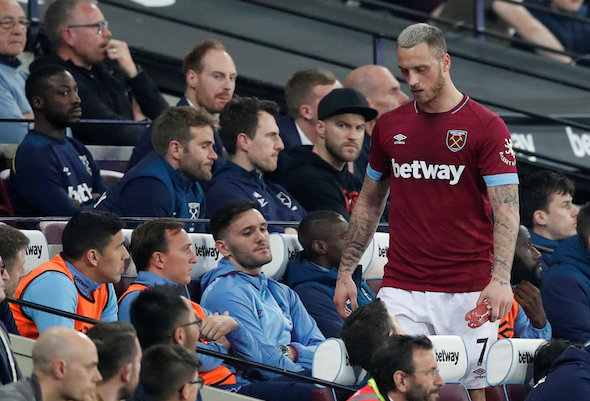 West Ham players will be understanding of the transfer saga involving Marko Arnautovic this summer, according to Danny Mills.

The former Leeds and Manchester City defender, speaking in an exclusive interview with Football Insider, claims that the Irons dressing room will not have too much of a problem with the way the Austrian has conducted himself as he edges towards the exit.

National reports, including the BBC, say that the 30-year-old hitman is set to seal a move to China after West Ham accepted an offer in excess of £20million, just months after putting pen to paper on a new contract.

Having seen the Austrian star seemingly try to force a move away from the Hammers, Mills insists the rest of the squad will be understanding of his situation and that it is not a problem that will affect the players.

“I think in this day and age, you know what it is,” Mills told Football Insider.

“I think all players, they understand it, they get it, they know the sort of players that are likely to cause problems from time to time and that’s what it is. Players are not daft in this day and age, they get it, it’s not a huge issue.

“We can all play up from time to time, it’s alright to play the moral, perfect card a lot of the time but it doesn’t work like that. When you’ve got a player of that ilk, the chances are he’s going to cause problems from time-to-time. As long as he’s doing it on the pitch, if he’s in the team, scoring goals and playing well, you accept it.

Arnautovic committed himself to the Irons with a new contract after the January transfer window, having been heavily linked with wanting a move to China.

The 30-year-old scored 10 goals in 28 Premier League appearances last season and has a total of 65 outings under his belt for the Hammers.

In other West Ham news, it can be REVEALED that the club are set to submit a £14million player bid after Premier League rivals pull out of the race.