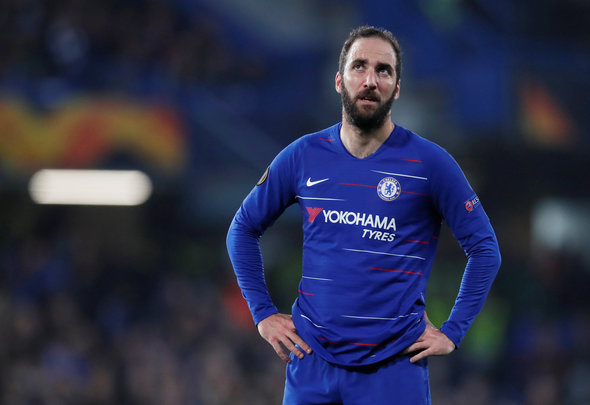 West Ham could be the perfect club for Gonzalo Higuain to rediscover his goalscoring form after a disappointing loan at Chelsea, according to Darren Bent.

The former England hitman, speaking exclusively to Football Insider, claims that he was a big fan of the 75-cap Argentinian international before his move to Stamford Bridge in January, saying he felt a little let down by the Juventus loanee.

Italian journalist Gianluca Di Marzio has claimed that West Ham have offered the 30-year-old a potential return to London on another loan spell, the Irons seeking reinforcements to bolster their threadbare options up front.

Bent admitted he would rather see someone younger signed to lead the line at the London Stadium but insisted that a reasonably priced loan deal for Higuain could be perfect for both player and club.

“I’m a big fan of Higuain, I was before but it didn’t really work for him at Chelsea,” Bent exclusively told Football Insider.

“He might go to West Ham and the pressure might be off him a little bit, not being at such a big, big club. He might go there, relax, and for all we know start banging the goals in, so it might fit.

“I thought West Ham might go for someone a little bit younger, a little bit fresher. I know these players don’t grow on trees, if they could get him on loan at a reasonable price, you can’t not take Higuain, as far as a permanent signing it would be nice to see someone younger.”

West Ham have seen Marko Arnautovic follow Andy Carroll and Lucas Perez out the exit door over the last week, leaving Javier Hernandez and Jordan Hugill as their only recognised senior strikers.

Michail Antonio has operated up front in the past and was once again handed a striking role in the club’s 3-2 friendly victory over Altach, scoring the Hammers’ second goal.

In other West Ham news, Danny Mills has tipped a Premier League rival to get the better of the Irons in the hunt for an “absolute menace” this summer.