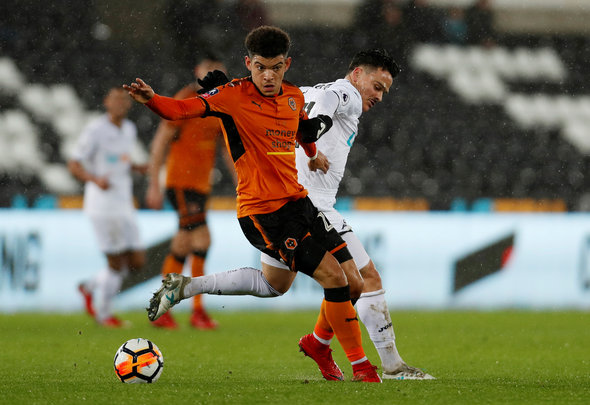 Wolves playmaker Morgan Gibbs-White has agreed terms to sign a new deal at Molineux despite being wanted by Tottenham, according to a report.
The Sun claims that Liverpool and Arsenal were also interested in snapping up Gibbs-White, who signed a professional contract with the Championship title favourites on Saturday as he celebrated his 18th birthday.
It is understood that Jurgen Klopp was very keen on the dazzling midfielder, who helped the England Under-17s win the World Cup in India in the summer.
Gibbs-White’s old deal was due to expire at the end of next season, but his long-term future is now sorted and the central midfielder may play a part if Wolves get promoted to the Premier League this term.
He has made 11 appearances in the senior squad of the Black Country club, although just three of them have come this season.
With a lot of big-money names in Nuno Esprito Santo’s squad, the England youth international’s route to the first-team may become even more blocked in the summer.
Football Insider verdict
Gibbs-White has bags of potential and he is bound to become a star in a few years time. He just needs to keep his head down and not let the hype that has been generated around him get to his head. Wolves are probably going to go on a big spend in the summer to bring their squad up to higher Premier League standards. That could mean that Gibbs-Whites’ chances to progress at Molineux could be stifled. It may be worth sending the teenage sensation out on loan in the summer. He could probably get into some Championship squads, so that could really help him progress. As for Tottenham, they could revisit their interest in the midfielder in a few years.
In other Tottenham news, Spurs have been tipped to sign this £110,000-a-week playmaker after a bid worth £35million was tabled.
We’ve launched a << BREAKING NEWS FEED>> exclusively for your club. ‘Like Us’ on Facebook by clicking here if you want 24/7 updates on all Tottenham breaking news.