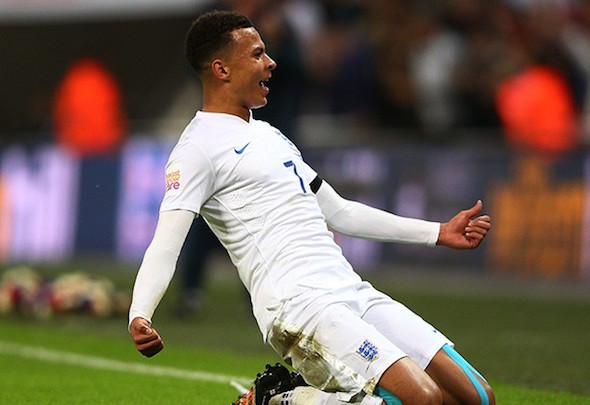 Alli has the potential to fill the shoes of an England legend, Harry Kane is the best No9 available to Roy Hodgson and other things we learned from England 2 France 0.
By Editor Wayne Veysey
Delle Alli is at home in international football
What a performance this was from the 19-year-old. Making resounding judgements from friendlies, especially ones played in strange and awful circumstances as this was, is a precarious business. But such was Alli’s command of the midfield and his all-action dynamism that it brought back memories of a 20-year-old Steven Gerrard’s first strides on the international stage back in 2000. Alli’s stunning tackle-and-goal combo was the highlight of an entertaining match, but it was his total conviction on the international stage that will really excite Roy Hodgson. England could have a special player on their hands.
Kane is a better No9 than Rooney
The Tottenham spearhead did not add to his three international goals but gave the visiting defence the runaround all game. His touch, movement and use of the ball was mostly of the highest order, and his willingness to defend from the front never allowed them to settle. Laurent Koscielny and Rafael Varane are hardly mugs, either. Wayne Rooney may have scored a fine volley to extend his record England goals tally but, with his speed across the ground not what it was, the skipper does not possess the all-round threat in the centre-forward role that Kane does. Assuming Daniel Sturridge continues to spend more time in the treatment room than out of it, Kane is the best bet to lead the England line at Euro 2016.


Martial is wasted on the left
Such is Anthony Martial’s threat when he takes the ball on the left wing, cuts inside and homes in on the goal, it is little wonder that Louis van Gaal and Didier Deschamps regard him as a key attacking weapon on the flank. The Manchester United forward gave Nathaniel Clyne some nervous moments with a few turbo-charged runs – to recall his fabulous debut goal against Liverpool – but the sense is that he is still wasted out wide. Deprived of the chance to play on the shoulder of the centre-back, he is unable to get in the penalty box quite as often.
Stones is improving by the week
Not since Rio Ferdinand was in his pomp have England had a centre-back so comfortable in possession. But, whisper it, even the United great did not look quite so classy stepping up from the back with the ball at his feet as the Everton man. Stones brought the ball forward at every opportunity and his use of the ball, bar one or two wayward passes, was generally excellent. This took the pressure off the central midfielders and gave England an excellent option in tight spaces. The 21-year-old, who seems to be improving by the week, can also defend. He has comfortably looked the best of England’s four centre-backs over the last two matches.

This was an uplifting night for football
Given the tragic circumstances leading up to the match, this was always going to be a difficult occasion for France. But Wembley – and English football – proved to be courteous and respectful hosts. The 71,223 fans present showed solidarity with their French counterparts, the FA handled the tributes sensitively and France and England stood shoulder to shoulder three days after the Paris terror attacks. The two managers had set the tone beforehand with their statesmanship and both sets of players behaved impeccably. It was an uplifting night for football.