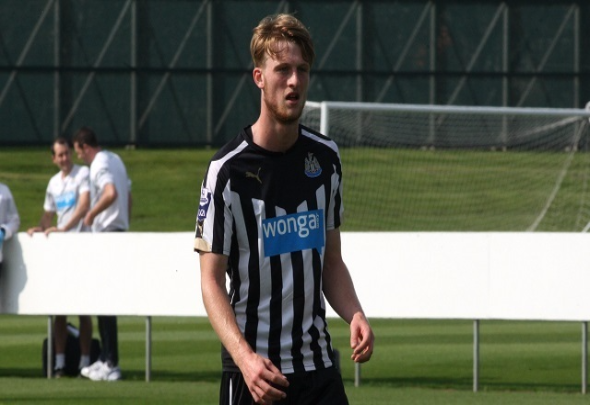 Newcastle forward Tom Heardman has joined League Two side Hartlepool on loan until January, it was announced on Tuesday.

The north east side confirmed on their official club website that the 20-year-old had secured a four-month loan deal with the Victoria Park outfit.

With the transfer deadline on Wednesday and there not being an emergency loan window in the new campaign, Hartlepool will have been eager to get the deal over the line.

The youngster will now join Craig Hignett’s side and he could make his debut as early as Wednesday evening when Hartlepool face Notts County in the Checkatrade Trophy.

The Gosforth-born youngster has recently returned from a long injury lay-off starting his first match in over a year, when Newcastle Under-23’s met Ashington in a pre-season friendly earlier in August.

He continued his comeback in a pre-season friendly against Barnsley and West Ham in the Premier League 2 division, where the young striker netted a goal on both occasions.

Heardman had a loan spell with Gateshead in 2014, where he made just three appearances in the national league.

The youngster will be looking to continue his impressive form following his injury and will be eager to get some vital experience with Hartlepool.

In other Newcastle transfer news, Cheick Tiote is considering a switch to Greek champions Olympiakos.