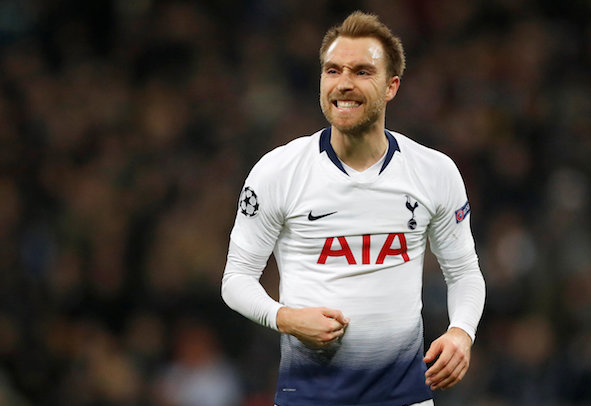 Christian Eriksen is in an “unbelievable” situation at Tottenham after Daniel Levy slapped a £130million price tag on him, according to the Guardian.

The newspaper claim the chairman has let it be known that he would cost a near-Premier League record fee to prise the Denmark international from north London this season.

The Guardian report that this “has drawn the usual rueful smiles” and if this did not involve Levy, “the position would be unbelievable”.

With a year remaining on his contract this summer, Eriksen is in a strong negotiating position after holding off on signing the new deal offered to him by Spurs on what reportedly has been many occasions. At least, that’s what the great Dane and his representatives would have thought. Many would claim that Eriksen’s market value has slipped to around half the sum that Levy is demanding, even though he has just turned 27 and is at the peak of his powers. Sure, Liverpool sold Philippe Coutinho to Barcelona last summer in a deal worth £142million including add-ons, but the Brazilian had signed a long-term contract the previous year and was also two years younger at the time. He has not had a great season at Camp Nou, far from it, but he was widely considered one of the outstanding players in the Premier League at the time of his exit. Eriksen is probably just below the top bracket, and his form has been mixed at Spurs this season. A complicated summer awaits him, that’s for sure.