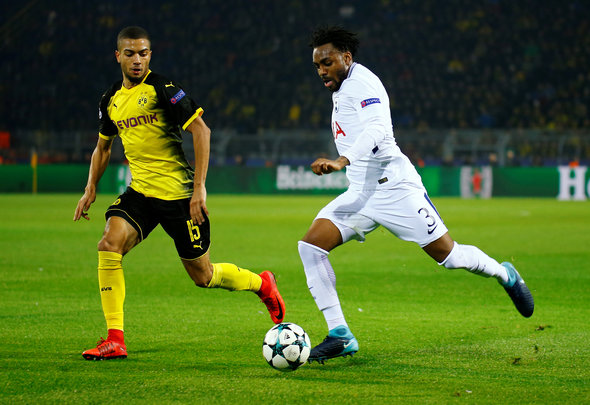 Former Liverpool defender turned ESPN pundit, Steve Nicol, thinks that Tottenham Hotspur are set to lose the services of Danny Rose in the Summer, should Man United bid enough.
Speaking on ESPN, Nicol stated that it will take “Kyle Walker type money” to gain the signature of England’s prefered left-back.
Kyle Walker was sold to Manchester City for £50million in the Summer of 2017, earning almost double the ammount he did under Pochettino.
Danny Rose however remained at Spurs, and as the Express report, was unhappy with the wage structure and transfer business at the club, coming into the season.
But Nicol does not believe that the England international will remain a Spurs player for long, as Pochettino has an abundence of full-backs at the club,
“This is one that I can see happening, Tottenham have got enough cover, the likes of [Serge] Aurier, [Kieran] Trippier and [Ben] Davies.”
Rose has been sidelined for much of the 2017/18 season with a knee injury, and the 27-year-old regaining full fitness could jeopardise the sum of money recevied.
Football Insider verdict:
Manchester United do not have the same quality in depth at the full-back position as do Spurs. Rose has been heavily linked with a move away from Tottenham since the Summer, and would fit in at Old Trafford. Luke Shaw has never been able to hold down a place in the team, and the way that Mourinho utilises his wing-backs suits Dany Rose’s style of forward thinking play. Rose, who is seemingly unsettled at Tottenham, could do with a fresh challenge to regain motivation, although he has enjoyed a good career at White Hart Lane – becoming England’s first choice left-back option.
In other Tottenham transfer news, it has been reported that Spurs have ended their interest in Bordeaux’s electrifying forward.